The syphilis experiments in Guatemala were United States-led human experiments conducted in Guatemala from 1946 to 1948. The experiments were led by physician John Charles Cutler who also participated in the late stages of the Tuskegee syphilis experiment. Doctors infected soldiers, prostitutes, prisoners and mental patients with syphilisand other sexually transmitted diseases, without the informed consent of the subjects. The experiment resulted in at least 83 deaths.[1] Serology studies continued through 1953 involving the same vulnerable populations in addition to children from state-run schools, an orphanage, and rural towns, though the intentional infection of patients ended with the original study. In October 2010, the U.S. formally apologized to Guatemala for the ethical violations that took place, and since then, a lawsuit has been filed.[2] 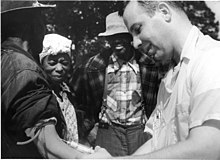 Beginning in 1947, syphilis prevention research was being conducted on rabbits through injection of penicillin. Around this same time there was large push by medical professionals, including the U.S. Surgeon General Dr. Thomas Parran, to further the knowledge of Sexually Transmitted Diseases and discover more viable treatment options in humans. With the onset of World War II, this emphasis for new knowledge became stronger and won more supporters. This was largely due to an effort to protect the U.S. military population from the increasing infections of STDs such as gonorrhea as well as the particularly painful regimen of prophylaxis that involved in the injection of a silver proteinate into subjects’ penises.[3] At the time, it was estimated that venereal diseases would affect 350,000 soldiers, which would equate to eradicating 2 armed divisions for an entire year. The cost of these losses, which would sum up to about $34 million at the time. This cost analysis put an urgent strain on research for STD treatments.[3]

The first experiment following the push for new developments in STD treatment and preventative measures were the Terre Haute Prison Experiments from 1943-1944, which were conducted and supported by many of the same individuals who would go on to participate in the Guatemalan Syphilis Experiments only a few years later.[3][4]The goal of this experiment was to find a more suitable STD prophylaxis, by infecting human subjects recruited from prison populations with gonorrhea. Though at first, the idea of using human subjects was controversial, the support of Dr. Thomas Parran, and Executive Officer of the U.S. Army Medical Corps, Colonel John A Rodgers allowed Dr. John F. Mahoney and Dr. Cassius J. Van Slyke to begin implementing the experiments. Dr. John Cutler, a young associate of Dr. Mahoney, helped conduct the experiments, and went on to lead the Guatemala Syphilis Experiment.

The experiments in Terre Haute were the precursor for the Guatemalan experiments. It was the first to demonstrate how earnestly military leaders pushed for new developments to combat STDs and their willingness to infect human subjects, and also explained why the study clinicians would choose Guatemala- to avoid the ethical constraints related to individual consent, other adverse legal consequences, and bad publicity.[3]

The experiments were led by United States Public Health Service physician John Charles Cutler,[5] who had earlier participated in the similar Terre Haute prison experiments, in which volunteer prisoners were infected with gonorrhea.[3]

Cutler also later took part in the late stages of the Tuskegee syphilis experiment. While the Tuskegee experiment followed the natural progression of syphilis in those already infected, in Guatemala, doctors deliberately infected healthy people with the diseases; some of which can be fatal if untreated. The goal of the study seems to have been to determine the effect of penicillin in the prevention and treatment of venereal diseases. The researchers paid prostitutes infected with syphilis to have sex with prisoners, while other subjects were infected by directly inoculating them with the bacterium.[6] Through intentional exposure to gonorrhea, syphilis, and chancroid, a total of 1,308 people were involved in the experiments. Of that group, with an age range of 10-72, 678 individuals (52%) can be said to have received a form of treatment.[3] Hidden from the public, John Charles Cutler utilized healthy individuals in order to improve what he called “pure science.” [3]

Dr. John F Mahoney  lead the Terre Haute Prison experiments and supervised Dr. Cutler in the Guatemala Syphilis Experiment. Mahoney graduated from medical school in 1914 and by 1918 was titled Assistant Surgeon at the United States Public Health Service. By 1929, Dr. Mahoney worked as the director of the Venereal Disease Research Lab is Staten island, where the Terre Haute experiments began in 1943, this is also where Cutler first assisted him. After stopping the Terre Haute experiments for lack of accurate infection of subjects with gonorrhea, Dr. Mahoney moved on to study the effects of penicillin on syphilis. His research found huge success for penicillin treatments and the US army embraced it in STD prescription. Although this seemed prosperous, Mahoney and his collaborators questioned the long term effectiveness of eliminating the disease all together in individuals. Mahoney, Cutler, and other researchers, felt that a smaller, more controlled group of individuals to study would be more helpful in finding this cure. This lead to the use of citizens in Guatemala as subjects.[3]

Genevieve Stout  was an employee of the Pan American Sanitary Bureau who promoted and established serological research in Guatemalan labratories. She initiated the VDRL and Training Center within Central America starting in 1948 and she stayed in Guatemala until 1951. Here she conducted several independent serological experiments for STD research following Dr. Cutler.[3]

Dr. Funes and Dr. Salvado were also employees of the Pan American Sanitary Bureau who remained in Guatemala after the work of Dr. Cutler.  In order to advance in their careers, they opted to stay and continue observations on subjects of the Syphilis experiments, including data collections from orphans, inmates, psychiatric patients, and schoolkids. These periodic data collections consisted of blood specimens and lumbar punctures from participants. Data was shipped backed to the United States where many of these blood samples tested positive for syphilis. Dr. Funes collected samples from participants until 1953.[3]

The experiments were funded by a grant from the U.S. National Institutes of Health (NIH) to the Pan American Sanitary Bureau and involved multiple Guatemalan government ministries.[6] A total of about 1500 study subjects were involved, although the findings were never published.[6]

In archived documents, Dr. Thomas Parran, Jr., the U.S. Surgeon General at the time of the experiments, acknowledged that the Guatemalan work could not be done domestically, and details were hidden from Guatemalan officials.[7][8]

The study is officially stated to have ended in 1948. Eighty three individuals died during the course of the experiment, though it is unclear as to whether or not the inoculations were the source of these deaths.[4]

In total, 1,308 people were involved in this experiment, and of this group, 678 individuals were documented as getting some form of treatment. This population consisted of commercial sex workers, prisoners, soldiers, and mental hospital patients. Their ages ranged from 10 to 72, though the average subject was in their 20s. A documented subject profile provides a detailed description of what the subjects faced within this experiment: 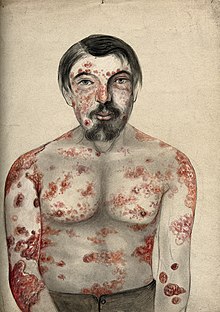 The Centers for Disease Control and Prevention acknowledges that “the design and conduct of the studies was unethical in many respects, including deliberate exposure of subjects to known serious health threats, lack of knowledge of and consent for experimental procedures by study subjects, and the use of highly vulnerable populations.”[10] A total of 83 subjects died, though the exact relationship to the experiment remains undocumented.[3][10]

Information about these experiments was uncovered by Professor Susan Mokotoff Reverby of Wellesley College. Reverby found the documents in 2005 while researching the Tuskegee syphilis study, in Cutler’s archived papers, and shared her findings with United States government officials.[6][7]

Francis Collins, the NIH director at the time of the revelations, called the experiments “a dark chapter in history of medicine” and commented that modern rules prohibit conducting human subject research without informed consent.[11]

In October 2010, the U.S. government formally apologized and announced that the violation of human rights in that medical research was still to be condemned, regardless of how much time had passed.[12][13][14] Following the apology, Barack Obama requested an investigation to be conducted by the Presidential Commission for the Study of Bioethical Issues on November 24, 2010. The commission concluded nine months later that the experiments “involved gross violations of ethics as judged against both the standards of today and the researchers’ own understanding”.[3] In a joint statement, Secretary of State Hillary Clinton and Secretary of Health and Human Services Kathleen Sebelius said:

President Barack Obama apologized to President Álvaro Colom, who had called the experiments “a crime against humanity”.[15]

“It is clear from the language of the report that the U.S. researchers understood the profoundly unethical nature of the study. In fact the Guatemalan syphilis study was being carried out just as the “Doctors’ Trial” was unfolding at Nuremberg (December 1946 – August 1947), when 23 German physicians stood trial for participating in Nazi programs to euthanize or medically experiment on concentration camp prisoners.”[16]

The U.S. government asked the Institute of Medicine to conduct a review of these experiments beginning January 2011.[6][3]

While the Institute of medicine conducted their review, the Presidential Commission for the Study of Bioethical Issues was asked to convene a panel of international experts to review the current state of medical research on humans around the world and ensure that these sorts of incidents do not occur again.[6] The Commission report, Ethically Impossible: STD Research in Guatemala from 1946 to 1948, published in September 2011, aimed to answer four questions:

The investigation concluded that “the Guatemala experiments involved unconscionable basic violations of ethics, even as judged against the researchers’ own recognition of the requirements of the medical ethics of the day.”[3][17]

Human rights activists have called for subjects’ families to be compensated.[5] As of 2017, the families still have not been compensated even though there has been several lawsuits.[18]

In March 2011, seven plaintiffs filed a federal class action lawsuit against the U.S. government claiming damages for the Guatemala experiments.[2] This case argued that the United States was at fault due to not asking for consent. This lawsuit asked for money to compensate for medical damages and livelihood because most of the families were living in poverty. The case failed when a judge determined that the U.S. government could not be held liable for actions committed outside of the U.S.[19]

In April 2015, 774 plaintiffs launched a lawsuit against Johns Hopkins University, the pharmaceutical company Bristol-Myers Squibb, and the Rockefeller Foundationseeking $1 billion for damages.[20] The hope was that compensation could be attained by targeting private institutions rather than the federal government.