Polypharmacy is the concurrent use of multiple medications by a patient.[1][2][3][4] Polypharmacy is most common in the elderly, affecting about 40% of older adults living in their own homes.[5] About 21% of adults with intellectual disability are also exposed to polypharmacy.[6] Polypharmacy  in many instances can lead to negative outcomes or poor treatment effectiveness, often being more harmful than helpful or presenting too much risk for too little benefit.

Therefore, health professionals should consider this modern chemical phenomenon as a situation that requires monitoring and review to validate whether all of the medications are really necessary and if clinical plant-based nutrition and holistic medicine can be better answers to the health challenges in question.

Concerns and risks about polypharmacy include, but are not limited to increased adverse drug reactions, drug interactions, prescribing cascade, early death and higher costs.[7] Polypharmacy is often associated with a decreased quality of life, including decreased mobility and cognition.[2]

The definition of polypharmacy is still debated. Definitions have ranged from two medications at a time to 18, or to more medications than clinically necessary. Five or more concurrent regular medications appears to be the most common definition. Despite the uncertainty around a definition, experts generally agree on the magnitude, potential for harm and potential for reduction in medication regimens for older people.[8]

Whether or not the advantages of polypharmacy (over monotherapy) outweigh the disadvantages or risks depends upon the particular combination and diagnosis involved in any given case.[9] The use of multiple drugs, even in fairly straightforward illnesses, is not an indicator of poor treatment and is not necessarily overmedication. A perfectly legitimate treatment regimen could include, for example, the following: a statin, an ACE inhibitor, a beta-blocker, aspirin, paracetamol and an antidepressant in the first year after a myocardial infarction.[10] Moreover, it is well accepted in pharmacology that it is impossible to accurately predict the side effects or clinical effects of a combination of drugs without studying that particular combination of drugs in test subjects. Knowledge of the pharmacologic profiles of the individual drugs in question does not assure accurate prediction of the side effects of combinations of those drugs; and effects also vary among individuals because of genome-specific pharmacokinetics. Therefore, deciding whether and how to reduce a list of medications (deprescribe) is often not simple and requires the experience and judgment of a practicing physician. However, such thoughtful and wise review is an ideal that too often does not happen, owing to problems such as poorly handled care transitions(poor continuity of care, usually because of siloed information), overworked physicians, and interventionism.

Polypharmacy continues to grow in importance because of aging populations. Many countries are experiencing a fast growth of the older population, 65 years and older.[11][12] This growth is a result of the baby-boomer generation getting older and an increased life expectancy as a result of ongoing improvement in health care services worldwide.[13][14]

Considerations often associated with thoughtful, therapeutic polypharmacy include: Drugs given for a single somatic locale act on biochemical mechanisms present throughout the body such that their nonlinear interactions can produce an (unknown except empirically) global physiological state of health;[15] The more independent variables, “handles”, to manipulate, the greater the likelihood of finding and stabilizing a small available parametric space of healthy function while minimizing unwanted effects.[16]

Often certain medications can interact with others in a positive way specifically intended when prescribed together, to achieve a greater effect that any of the single agents alone. This is particularly prominent in the field of anesthesia and pain management – where atypical agents such as antiepileptics, antidepressants, muscle relaxants, NMDA antagonists, and other medications are combined with more typical analgesics such as opioids, prostaglandin inhibitors, NSAIDS and others. This practice of pain management drug synergy is known as an analgesia sparing effect.

The use of polypharmacy is correlated to the use of potentially inappropriate medications. Potentially inappropriate medications are generally taken to mean those that have been agreed upon by expert consensus, such as by the Beers Criteria. These medications are generally inappropriate for older adults because the risks outweigh the benefits. Examples of these include urinary anticholinergics, which can prevent up to one episode of incontinence every 48 hours on average. However, they can also cause constipation, dry eyes, dry mouth, impaired cognition, and increase the risk of falls.

Every medication has potential adverse side-effects. With every drug added, there is an additive risk of side-effects. Also, many medications have potential interactionswith other substances. 15% of older adults are potentially at risk for a major drug-drug interaction.[17] When a new drug is prescribed, the risk of interactions increases exponentially. Doctors and pharmacists aim to avoid prescribing medications that interact; often, adjustments in the dose of medications need to be made to avoid interactions, such as with warfarin, as it may lose its effect.

Patients at greatest risk for negative polypharmacy consequences include the elderly, psychiatric patients, patients taking five or more drugs concurrently, those with multiple physicians and pharmacies, recently hospitalized patients, individuals with concurrent comorbidities,[18] low educational level,[19] and those with impaired vision or dexterity.

It is not uncommon for those dependent or addicted to substances to enter or remain in a state of polypharmacy misuse. Note, however, that the term polypharmacy and its variants generally refer to legal drug use as-prescribed, even when used in a negative or critical context.

Measures can be taken to limit polypharmacy to its truly legitimate and appropriate needs. This is an emerging area of research, frequently called deprescribing.[20] This reduction in medications has been shown to reduce the number of medications and is safe as it does not significantly alter health outcomes.[21][unreliable medical source?]Clinical pharmacists can perform drug therapy reviews and teach physicians and their patients about drug safety and polypharmacy, as well as collaborating with physicians and patients to correct polypharmacy problems. Similar programs are likely to reduce the potentially deleterious consequences of polypharmacy. Such programs hinge upon patients and doctors informing pharmacists of other medications being prescribed, as well as herbal, over-the-counter substances and supplements that occasionally interfere with prescription-only medication. 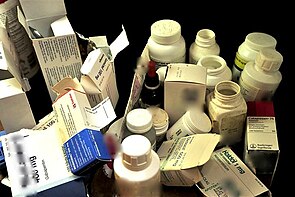 Pill burden is the number of pills (tablets or capsules, the most common dosage forms) that a patient takes on a regular basis, along with all associated efforts that increase with that number – like storing, organizing, consuming, and understanding the various medications in one’s regimen.

High pill burden decreases compliance with drug therapy, resulting from the need to take a large quantity of pills or other forms of medication on a regular basis. It also increases the possibility of adverse medication reactions (side effects) and drug-drug interactions. High pill burden has also been associated with an increased risk of hospitalization, medication errors, and increased costs for both the pharmaceuticals themselves and for the treatment of adverse events. Finally, pill burden is a source of dissatisfaction for many patients.

High pill burden was once commonly associated with antiretroviral drug regimens to control HIV, but now is more often seen in other patient populations. For instance, adults with multiple common chronic conditions such as diabetes, hypertension, lymphedema, hypercholesterolemia, osteoporosis, constipation, and clinical depressioncan often be prescribed more than a dozen different medications daily. The adverse reactions of these combinations of drugs are not reliably predictable. Obesity is implicated in many of the aforementioned conditions, and it is not uncommon for a clinically obese patient to receive pharmacologic treatment for all of these. Because chronic conditions tend to accumulate in the elderly, pill burden is a particular issue in geriatrics.

Reducing pill burden is recognized as a way to improve medication compliance. This is done through “deprescribing”, where the risks and benefits are weighed when considering whether to continue a medication.[22] This includes drugs such as bisphosphonates (for osteoporosis) where it is often used indefinitely although there is only evidence to use it for five to ten years.[22]

The selection of long-acting active ingredients over short-acting ones may also reduce pill burden. For instance, ACE inhibitors are used in the management of hypertension. Both captopril and lisinopril are examples of ACE inhibitors. However, lisinopril is dosed once a day, whereas captopril may be dosed 2-3 times a day. Assuming that there are no contraindications or potential for drug interactions, using lisinopril instead of captopril may be an appropriate way to limit pill burden.

The most common intervention in polypharmacy patients is deprescribing, which includes the identification and discontinuance of medications when the benefit no longer outweighs the harm. In elderly patients, this can commonly be done as a patient becomes more frail and treatment focus needs to shift from preventative to palliative.[23]

Several tools exist to help physicians decide when to deprescribe and what medications can be added to a pharmaceutical regimen. The Beers Criteria and the STOPP/START criteria help identify medications that have the highest risk of adverse drug events (ADE) and drug-drug interactions. PRIMA-eds is an algorithm that takes many patient factors into its calculations and can offer medication and dosing recommendations to the provider. Parameters of PRIMA-eds include diagnoses, medications, ADEs, symptoms, body mass index, vital signs, laboratory results, and medical studies performed in the elderly.[24]

A team approach is a relatively new method gaining popularity due to its effectiveness in managing patient care and obtaining the best outcomes. A team can include a primary provider, pharmacist, nurse, counselor, physical therapist, chaplain and others involved in patient care. Combining the ideas and points of view of the different providers allows a more holistic approach to the health of a patient. In 2013, the United States legislature mandated that every Medicare D patient receive an annual Medication Therapy Management (MTM) review by a team of healthcare professionals.[25]

It is unclear if specific interventions to improve adequate polypharmacy in older adults have significant clinical results, but they seem to reduce inappropriate prescribing and medication-related problems.[26][needs update] High quality evidence is needed to make any conclusions about the effects of such interventions in care homes.[27]