In cell biology, phagocytosis (from Ancient Greek φαγεῖν (phagein) , meaning ‘to devour’, κύτος, (kytos) , meaning ‘cell’, and -osis, meaning ‘process’) is the process by which a cell – often a phagocyte or a protist – engulfs a solid particle to form an internal compartment known as a phagosome. It is distinct from other forms of endocytosis, like pinocytosis, that involve the internalization of extracellular liquids. Phagocytosis is involved in the acquisition of nutrients for some cells. The process is homologous to eating at the level of single-celled organisms; in multicellular animals, the process has been adapted to eliminate debris and pathogens, as opposed to taking in fuel for cellular processes, except in the case of the animal Trichoplax.

In an organism’s immune system, phagocytosis is a major mechanism used to remove pathogens and cell debris. For example, when a macrophage ingests a pathogenic microorganism, the pathogen becomes trapped in a phagosome which then fuses with a lysosome to form a phagolysosome. Within the phagolysosome, enzymes and toxic peroxides digest the pathogen. Bacteria, dead tissue cells, and small mineral particles are all examples of objects that may be phagocytized. 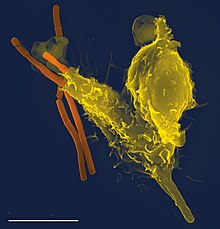 Phagocytosis in mammalian immune cells is activated by attachment to pathogen-associated molecular patterns (PAMPS), which leads to NF-κB activation. Opsonins such as C3b and antibodies can act as attachment sites and aid phagocytosis of pathogens.[2]

Phagocytosis is the process in which a cell engulfs a particle, digests it, and expels the waste products. Process of phagocytosis:

Engulfment of material is facilitated by the actin-myosin contractile system. The phagosome of ingested material is then fused with the lysosome, forming a phagolysosome and leading to degradation.

Degradation can be oxygen-dependent or oxygen-independent.

Other enzymes like hyaluronidase, lipase, collagenase, elastase, ribonuclease, deoxyribonuclease also play an important role in preventing the spread of infection and degradation of essential microbial biomolecules leading to cell death. It is possible for cells other than dedicated phagocytes (such as dendritic cells) to engage in phagocytosis. Some white blood cells in human immune system perform phagocytosis by gulping in some pathogenic and disease causing cells.[4]

Leukocytes generate hydrogen cyanide during phagocytosis, and can kill bacteria, fungi, and other pathogens by generating several other toxic chemicals.[5][6][7]

Following apoptosis, the dying cells need to be taken up into the surrounding tissues by macrophages in a process called efferocytosis. One of the features of an apoptotic cell is the presentation of a variety of intracellular molecules on the cell surface, such as calreticulin, phosphatidylserine (from the inner layer of the plasma membrane), annexin A1, oxidised LDL and altered glycans.[8] These molecules are recognised by receptors on the cell surface of the macrophage such as the phosphatidylserine receptor or by soluble (free-floating) receptors such as thrombospondin 1, GAS6, and MFGE8, which themselves then bind to other receptors on the macrophage such as CD36 and alpha-v beta-3 integrin. Defects in apoptotic cell clearance is usually associated with impaired phagocytosis of macrophages. Accumulation of apoptotic cell remnants often causes autoimmune disorders; thus pharmacological potentiation of phagocytosis has a medical potential in treatment of certain forms of autoimmune disorders.[9][10][11][12] 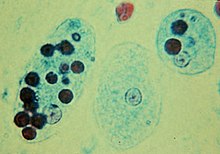 In many protists, phagocytosis is used as a means of feeding, providing part or all of their nourishment. This is called phagotrophic nutrition, distinguished from osmotrophic nutrition which takes place by absorption.[citation needed]

As in phagocytic immune cells, the resulting phagosome may be merged with lysosomes containing digestive enzymes, forming a phagolysosome. The food particles will then be digested, and the released nutrients are diffused or transported into the cytosol for use in other metabolic processes.