The effect of mobile phone radiation on human health is a subject of interest and study worldwide, as a result of the enormous increase in mobile phone usage throughout the world. As of 2015, there were 7.4 billion subscriptions worldwide, though the actual number of users is lower as many users own more than one mobile phone.[1] Mobile phones use electromagnetic radiation in the microwave range (450–3800 MHz and 24-80GHz in 5G mobile). Other digital wireless systems, such as data communication networks, produce similar radiation.

The World Health Organization states that “A large number of studies have been performed over the last two decades to assess whether mobile phones pose a potential health risk. To date, no adverse health effects have been established as being caused by mobile phone use.”[2] In a 2018 statement, the FDA said that “the current safety limits are set to include a 50-fold safety margin from observed effects of radiofrequency energy exposure”.[3]

A 2010 review stated that “The balance of experimental evidence does not support an effect of ‘non-thermal’ radiofrequency fields” on the permeability of the blood-brain barrier, but noted that research on low frequency effects and effects in humans was sparse.[4] A 2012 study of low-frequency radiation on humans found “no evidence for acute effects of short-term mobile phone radiation on cerebral blood flow”.[5][6]

There is no strong or consistent evidence that mobile phone use increases the risk of getting brain cancer or other head tumors. The United States National Cancer Institute points out that “Radiofrequency energy, unlike ionizing radiation, does not cause DNA damage that can lead to cancer. Its only consistently observed biological effect in humans is tissue heating. In animal studies, it has not been found to cause cancer or to enhance the cancer-causing effects of known chemical carcinogens.” The majority of human studies have failed to find a link between cell phone use and cancer. In 2011 a World Health Organization working group classified cell phone use as “possibly carcinogenic to humans”. The CDC states that no scientific evidence definitively answers whether cell phone use causes cancer.[5][7][8]

In a 2018 statement, the FDA said that “the current safety limits are set to include a 50-fold safety margin from observed effects of radiofrequency energy exposure”.[3][9]

An analysis of an “eagerly anticipated” study using rats and mice by the National Toxicology Program indicates that due such issues as the inconsistent appearances of “signals for harm” within and across species and the increased chances of false positives due to the multiplicity of tests, the positive results seen are more likely due to random chance. The full results of the study were released in February 2018.[10

A decline in male sperm quality has been observed over several decades.[11][12][13] Studies on the impact of mobile radiation on male fertility are conflicting, and the effects of the radiofrequency electromagnetic radiation (RF-EMR) emitted by these devices on the reproductive systems are currently under active debate.[14][15][16][17] A 2012 review concluded that “together, the results of these studies have shown that RF-EMR decreases sperm count and motility and increases oxidative stress”.[18][19] A 2017 study of 153 men that attended an academic fertility clinic in Boston, Massachusetts found that self-reported mobile phone use was not related to semen quality, and that carrying a mobile phone in the pants pocket was not related to semen quality.[20]

Some users of mobile phones and similar devices have reported feeling various non-specific symptoms during and after use. Studies have failed to link any of these symptoms to electromagnetic exposure. In addition, EHS is not a recognised medical diagnosis.[21] 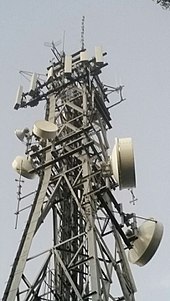 Experts consulted by France considered it was mandatory that the main antenna axis should not to be directly in front of a living place at a distance shorter than 100 metres.[22] This recommendation was modified in 2003[23] to say that antennas located within a 100-metre radius of primary schools or childcare facilities should be better integrated into the cityscape and was not included in a 2005 expert report.[24] The Agence française de sécurité sanitaire environnementale (fr) as of 2009, says that there is no demonstrated short-term effect of electromagnetic fields on health, but that there are open questions for long-term effects, and that it is easy to reduce exposure via technological improvements.[25]

In order to protect the population living around base stations and users of mobile handsets, governments and regulatory bodies adopt safety standards, which translate to limits on exposure levels below a certain value. There are many proposed national and international standards, but that of the International Commission on Non-Ionizing Radiation Protection (ICNIRP) is the most respected one, and has been adopted so far by more than 80 countries. For radio stations, ICNIRP proposes two safety levels: one for occupational exposure, another one for the general population. Currently there are efforts underway to harmonise the different standards in existence.[26]

Radio base licensing procedures have been established in the majority of urban spaces regulated either at municipal/county, provincial/state or national level. Mobile telephone service providers are, in many regions, required to obtain construction licenses, provide certification of antenna emission levels and assure compliance to ICNIRP standards and/or to other environmental legislation.

Many governmental bodies also require that competing telecommunication companies try to achieve sharing of towers so as to decrease environmental and cosmetic impact. This issue is an influential factor of rejection of installation of new antennas and towers in communities.

The safety standards in the US are set by the Federal Communications Commission (FCC). The FCC has based its standards primarily on those standards established by the Institute of Electrical and Electronics Engineers (IEEE), specifically Subcommittee 4 of the “International Committee on Electromagnetic Safety”.

In the US, a small number of personal injury lawsuits have been filed by individuals against cellphone manufacturers (including Motorola,[28] NEC, Siemens, and Nokia) on the basis of allegations of causation of brain cancer and death. In US federal courts, expert testimony relating to science must be first evaluated by a judge, in a Daubert hearing, to be relevant and valid before it is admissible as evidence. In a 2002 case against Motorola, the plaintiffs alleged that the use of wireless handheld telephones could cause brain cancer and that the use of Motorola phones caused one plaintiff’s cancer. The judge ruled that no sufficiently reliable and relevant scientific evidence in support of either general or specific causation was proffered by the plaintiffs, accepted a motion to exclude the testimony of the plaintiffs’ experts, and denied a motion to exclude the testimony of the defendants’ experts.[29]

Two separate cases in Italy, in 2009[30][31] and 2017,[32][33] resulted in pensions being awarded to plaintiffs who had claimed their benign brain tumors were the result of prolonged mobile phone use in professional tasks, for 5–6 hours a day, which they ruled different from non-professional use.

WHO: The Precautionary Principle

In 2000, the World Health Organization (WHO) recommended that the precautionary principle could be voluntarily adopted in this case.[34] It follows the recommendations of the European Community for environmental risks.

According to the WHO, the “precautionary principle” is “a risk management policy applied in circumstances with a high degree of scientific uncertainty, reflecting the need to take action for a potentially serious risk without awaiting the results of scientific research.” Other less stringent recommended approaches are prudent avoidance principle and as low as reasonably practicable. Although all of these are problematic in application, due to the widespread use and economic importance of wireless telecommunication systems in modern civilization, there is an increased popularity of such measures in the general public, though also evidence that such approaches may increase concern.[35] They involve recommendations such as the minimization of cellphone usage, the limitation of use by at-risk population (such as children), the adoption of cellphones and microcells with as low as reasonably practicable levels of radiation, the wider use of hands-free and earphone technologies such as Bluetoothheadsets, the adoption of maximal standards of exposure, RF field intensity and distance of base stations antennas from human habitations, and so forth.[citation needed]Overall, public information remains a challenge as various health consequences are evoked in the literature and by the media, putting populations under chronic exposure to potentially worrying information.[36]

In May 2011, the World Health Organization’s International Agency for Research on Cancer announced it was classifying electromagnetic fields from mobile phones and other sources as “possibly carcinogenic to humans” and advised the public to adopt safety measures to reduce exposure, like use of hands-free devices or texting.[37]

Some national radiation advisory authorities, including those of Austria,[38] France,[39] Germany,[40] and Sweden,[41] have recommended measures to minimize exposure to their citizens. Examples of the recommendations are:

The use of “hands-free” was not recommended by the British Consumers’ Association in a statement in November 2000, as they believed that exposure was increased.[42]However, measurements for the (then) UK Department of Trade and Industry[43] and others for the French Agence française de sécurité sanitaire environnementale [fr][44]showed substantial reductions. In 2005, Professor Lawrie Challis and others said clipping a ferrite bead onto hands-free kits stops the radio waves travelling up the wire and into the head.[45]

Several nations have advised moderate use of mobile phones for children.[46] A journal by Gandhi et al. in 2006 states that children receive higher levels of Specific Absorption Rate (SAR). When 5- and 10-year olds are compared to adults, they receive about 153% higher SAR levels. Also, with the permittivity of the brain decreasing as one gets older and the higher relative volume of the exposed growing brain in children, radiation penetrates far beyond the mid-brain.[47]

Products have been advertised that claim to shield people from EM radiation from cell phones; in the US the Federal Trade Commission published a warning that “Scam artists follow the headlines to promote products that play off the news – and prey on concerned people.”[48]

According to the FTC, “there is no scientific proof that so-called shields significantly reduce exposure from electromagnetic emissions. Products that block only the earpiece – or another small portion of the phone – are totally ineffective because the entire phone emits electromagnetic waves.” Such shields “may interfere with the phone’s signal, cause it to draw even more power to communicate with the base station, and possibly emit more radiation.”[48] The FTC has enforced false advertising claims against companies that sell such products.[49]