Minerals are elements that originate in the Earth and cannot be made by living organisms. Plants obtain minerals from the soil, and most of the minerals in our diets come directly from plants or indirectly from animal sources. Minerals may also be present in the water we drink, but this varies with geographic locale. Minerals from plant sources may also vary from place to place, because soil mineral content varies geographically.

Select a mineral from the list for more information.

In the context of nutrition, a mineral is a chemical element required as an essential nutrient by organisms to perform functions necessary for life.[1][2] Minerals originate in the earth and cannot be made by living organisms.[3] Plants get minerals from soil.[3] Most of the minerals in a human diet come from eating plants and animals or from drinking water.[3] As a group, minerals are one of the four groups of essential nutrients, the others of which are vitamins, essential fatty acids, and essential amino acids.[4]The five major minerals in the human body are calcium, phosphorus, potassium, sodium, and magnesium.[1] All of the remaining elements in a human body are called “trace elements”. The trace elements that have a specific biochemical function in the human body are sulfur, iron, chlorine, cobalt, copper, zinc, manganese, molybdenum, iodine and selenium.[5]

Most of the known and suggested mineral nutrients are of relatively low atomic weight, and are reasonably common on land, or for sodium and iodine, in the ocean

Most chemical elements that are ingested by organisms are in the form of simple compounds. Plants absorb dissolved elements in soils, which are subsequently ingested by the herbivores and omnivores that eat them, and the elements move up the food chain. Larger organisms may also consume soil (geophagia) or use mineral resources, such as salt licks, to obtain limited minerals unavailable through other dietary sources.

Bacteria and fungi play an essential role in the weathering of primary elements that results in the release of nutrients for their own nutrition and for the nutrition of other species in the ecological food chain. One element, cobalt, is available for use by animals only after having been processed into complex molecules (e.g., vitamin B12) by bacteria. Minerals are used by animals and microorganisms for the process of mineralizing structures, called “biomineralization”, used to construct bones, seashells, eggshells, exoskeletons and mollusc shells.[6]

At least twenty chemical elements are known to be required to support human biochemical processes by serving structural and functional roles as well as electrolytes.[7]However, as many as twenty-nine elements in total (including hydrogen, carbon, nitrogen and oxygen) are suggested to be used by mammals, as inferred by biochemical and uptake studies.[8] Calcium makes up 920 to 1200 grams of adult body weight, with 99% of it contained in bones and teeth.[1] Phosphorus makes up about 1% of a person’s body weight.[9] The other major minerals (potassium, sodium, chlorine, sulfur and magnesium) make up only about 0.85% of the weight of the body.[citation needed]Together these eleven chemical elements (H, C, N, O, Ca, P, K, Na, Cl, S, Mg) make up 99.85% of the body.[citation needed] There is not scientific consensus on whether chromium is an essential trace element. The United States and Japan designate chromium as an essential nutrient,[10][11] but the European Food Safety Authority (EFSA), representing the European Union, reviewed the question in 2014 and does not agree.[12]

Most of the known and suggested mineral nutrients are of relatively low atomic weight, and are reasonably common on land, or for sodium and iodine, in the ocean:

Minerals are present in a healthy human being’s blood at certain mass and molar concentrations. The figure below presents the concentrations of each of the chemical elements discussed in this article, from center-right to the right. Depending on the concentrations, some are in upper part of the picture, while others are in the lower part. The figure includes the relative values of other constituents of blood such as hormones. In the figure, minerals are color highlighted in purple.

Dietitians may recommend that minerals are best supplied by ingesting specific foods rich with the chemical element(s) of interest. The elements may be naturally present in the food (e.g., calcium in dairy milk) or added to the food (e.g., orange juice fortified with calcium; iodized salt fortified with iodine). Dietary supplements can be formulated to contain several different chemical elements (as compounds), a combination of vitamins and/or other chemical compounds, or a single element (as a compound or mixture of compounds), such as calcium (calcium carbonate, calcium citrate) or magnesium (magnesium oxide), or iron (ferrous sulfate, iron bis-glycinate).

The dietary focus on chemical elements derives from an interest in supporting the biochemical reactions of metabolism with the required elemental components.[35]Appropriate intake levels of certain chemical elements have been demonstrated to be required to maintain optimal health. Diet can meet all the body’s chemical element requirements, although supplements can be used when some recommendations are not adequately met by the diet. An example would be a diet low in dairy products, and hence not meeting the recommendation for calcium.

Many ultratrace elements have been suggested as essential, but such claims have usually not been confirmed. Definitive evidence for efficacy comes from the characterization of a biomolecule containing the element with an identifiable and testable function.[5] One problem with identifying efficacy is that some elements are innocuous at low concentrations and are pervasive (examples: silicon and nickel in solid and dust), so proof of efficacy is lacking because deficiencies are difficult to reproduce.[35]Ultratrace elements of some minerals such as silicon and boron are known to have a role but the exact biochemical nature is unknown, and others such as arsenic are suspected to have a role in health, but with weaker evidence.[5]

Minerals can be bioengineered by bacteria which act on metals to catalyze mineral dissolution and precipitation.[53] Mineral nutrients are recycled by bacteria distributed throughout soils, oceans, freshwater, groundwater, and glaciermeltwater systems worldwide.[53][54] Bacteria absorb dissolved organic matter containing minerals as they scavenge phytoplanktonblooms.[54] Mineral nutrients cycle through this marine food chain, from bacteria and phytoplankton to flagellates and zooplankton, which are then eaten by other marine life.[53][54] In terrestrial ecosystems, fungi have similar roles as bacteria, mobilizing minerals from matter inaccessible by other organisms, then transporting the acquired nutrients to local ecosystems.[55][56]

This article is about the table used in chemistry and physics. For other uses, see Periodic table (disambiguation). 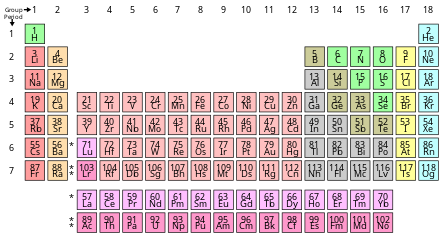 The periodic table, or periodic table of elements, is a tabular arrangement of the chemical elements, ordered by their atomic number, electron configuration, and recurring chemical properties, whose structure shows periodic trends. Generally, within one row (period) the elements are metals to the left, and non-metals to the right, with the elements having similar chemical behaviours placed in the same column. Table rows are commonly called periods and columns are called groups. Six groups have accepted names as well as assigned numbers: for example, group 17 elements are the halogens; and group 18 are the noble gases. Also displayed are four simple rectangular areas or blocks associated with the filling of different atomic orbitals.

The organization of the periodic table can be used to derive relationships between the various element properties, but also the predicted chemical properties and behaviours of undiscovered or newly synthesized elements. Russian chemist Dmitri Mendeleev was the first to publish a recognizable periodic table in 1869, developed mainly to illustrate periodic trends of the then-known elements. He also predicted some properties of unidentified elements that were expected to fill gaps within the table. Most of his forecasts proved to be correct. Mendeleev’s idea has been slowly expanded and refined with the discovery or synthesis of further new elements and the development of new theoretical models to explain chemical behaviour. The modern periodic table now provides a useful framework for analyzing chemical reactions, and continues to be widely used in chemistry, nuclear physics and other sciences.

All the elements from atomic numbers 1 (hydrogen) through 118 (oganesson) have been either discovered or synthesized, completing the first seven rows of the periodic table.[1][2] The first 98 elements exist in nature, although some are found only in trace amounts and others were synthesized in laboratories before being found in nature.[n 1] Elements 99 to 118 have only been synthesized in laboratories or nuclear reactors.[3] The synthesis of elements having higher atomic numbers is currently being pursued: these elements would begin an eighth row, and theoretical work has been done to suggest possible candidates for this extension. Numerous synthetic radionuclides of naturally occurring elements have also been produced in laboratories.