Medicinal fungi are those fungi which produce medically significant metabolites or can be induced to produce such metabolites using biotechnology. The range of medically active compounds that have been identified include antibiotics, anti-cancer drugs, cholesterol inhibitors, psychotropic drugs, immunosuppressants and even fungicides. Although initial discoveries centred on simple moulds of the type that cause spoilage of food, later work identified useful compounds across a wide range of fungi.

Although fungi products have been used in traditional and folk medicines, probably since pre-history, the ability to identify beneficial properties and then extract the active ingredient started with the discovery of penicillin by Alexander Fleming in 1928. Since that time, many additional antibiotics have been discovered and the potential for fungi to synthesize biologically active molecules, useful in a wide range of clinical therapies, has been extensively exploited.

The fungus with probably the longest record of medicinal use, Ganoderma lucidum, is known in Chinese as líng zhī (“spirit plant”), and in Japanese as mannentake (“10,000-year mushroom”). In ancient Japan, Grifola frondosa was worth its weight in silver, although no significant therapeutic benefits have been demonstrated in humans.[2]

Inonotus obliquus was used in Russia as early as the 16th century, and it featured in Alexandr Solzhenitsyn’s 1967 novel Cancer Ward.[3]

Penicillium is a potential source of the leukemia medicine asparaginase.[10]

Some countries have approved Beta-glucan fungal extracts lentinan, polysaccharide-K, and polysaccharide peptide as immunologic adjuvants.[11] Evidence suggests this use as effective in prolonging and improving the quality of life for patients with certain cancers, although the Memorial Sloan-Kettering Cancer Center observes that “well designed, large scale studies are needed to establish the role of lentinan as a useful adjunct to cancer treatment”.[12] According to Cancer Research UK, “there is currently no evidence that any type of mushroom or mushroom extract can prevent or cure cancer”.[13] Fungal metabolites such as ergosterol, clavilactones, and triterpenoids are efficient Cdk inhibitors that lead to G1/S or G2/M arrest of cancer cells. Other metabolites, such as panepoxydone, are inhibitors of NF-κB. Fucose and mannose fragments of fungal cell wall are antagonists of VEGF-receptors [14] 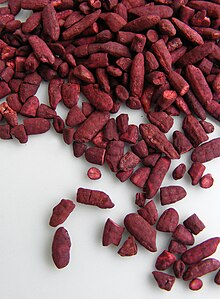 Statins are an important class of cholesterol-lowering drugs; the first generation of statins were derived from fungi.[15]Lovastatin, the first commercial statin, was extracted from a fermentation broth of Aspergillus terreus.[15] Industrial production is now capable of producing 70 mg lovastatin per kilogram of substrate.[16] The red yeast rice fungus, Monascus purpureus, can synthesize lovastatin, mevastatin, and the simvastatin precursor monacolin J. Nicotinamide riboside, a cholesterol biosynthesis inhibitor, is made by Saccharomyces cerevisiae.

A number of fungi have well documented psychotropic effects, some of them severe and associated with sometimes acute and life-threatening side-effects.[21] Well known amongst these is Amanita muscaria, the fly agaric. More widely used informally are a range of fungi collectively known as “magic mushrooms”, which contain psilocybin and psilocin.

The history of bread-making is also peppered with references to deadly ergotism caused by ergot, most commonly Claviceps purpurea, a parasite of cereal crops. A number of therapeutically useful drugs have subsequently been extracted from ergot including ergotamine, pergolide and cabergoline.[22]

A number of other fungal species, including species of Aspergillus and Penicillium, have been induced to produce ergot alkaloids.

The photochemistry of vitamin D biosynthesis

Fungi are a source of ergosterol which can be converted to vitamin D upon exposure to ultraviolet light to synthesize vitamins D2(ergocalciferol), D4 (22-dihydroergocalciferol), and D1 (Lumisterol+D2).[23][24]

Aspergillus niger is used to produce recombinant phytase, an enzyme added to animal feeds to improve absorption of phosphorus. 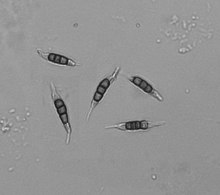