put this in Legal ins

thanks to Republican Senator Chuck Grassley, the Sunshine Act was inserted into Obamacare.

Open Payments is a national transparency program that collects and publishes information about financial relationships between the health care industry (i.e. drug and device companies) and providers (i.e. physicians and teaching hospitals). These relationships may involve payments to providers for things such as research, meals, travel, gifts, or speaking fees. One of the ways that the Centers for Medicare & Medicaid Services (CMS) provides data to the public is through this search tool, which allows the public to search for physicians and teaching hospitals receiving payments, as well as companies that have made payments.

There you can get an overview of the data that is collected and displayed and learn more about what is included in the data. For other Open Payments related questions, contact the Open Payments team at openpayments@cms.hhs.gov.

Pharmaceutical and medical device companies are now required by law to release details of their payments to a variety of doctors and U.S. teaching hospitals for promotional talks, research and consulting, among other categories. Use this tool to search for general payments (excluding research and ownership interests) made from August 2013 to December 2015. | Related Story: We’ve Updated Dollars for Docs. Here’s What’s New. »

Today we’ve updated our Dollars for Docs interactive database, adding an additional year of data and some new features that make it easier to see how much money your physician receives from pharmaceutical and medical device companies.

Dollars for Docs now includes payments made from August 2013 through December 2015.

Find out how industry dollars reach your doctors. Explore the app. 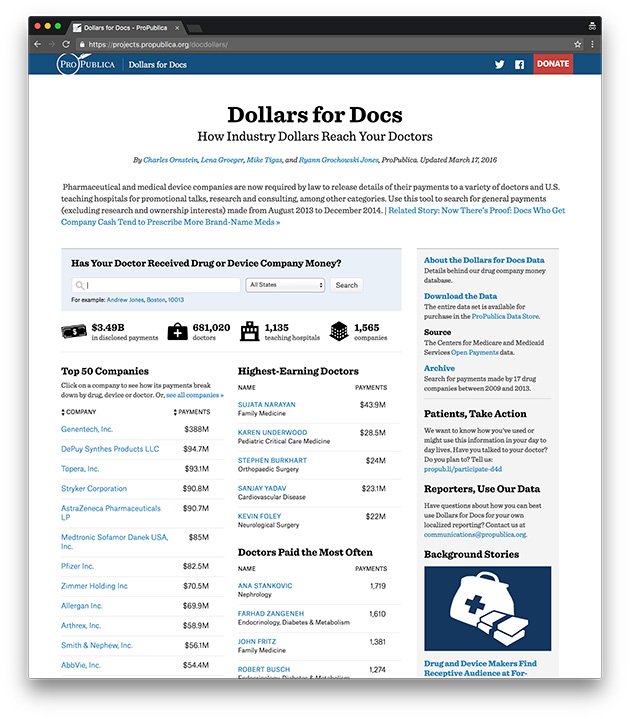 Download the data behind this story from the ProPublica Data Store.

Two full years of the data gives us the chance to compare year over year. Although spending by companies stayed constant, the numbers are nevertheless huge. Companies made about $2 billion in general payments to 618,000 physicians each year, in addition to another $600 million a year to teaching hospitals. General payments cover promotional speaking, consulting, meals, travel, gifts and royalties, but not research. The specific doctors who received payments changed quite a bit from 2014 to 2015; a quarter of doctors who received a payment in 2015 didn’t receive one in 2014, and vice versa.

Viekira is one of a handful of drugs seen as breakthroughs because they cure hepatitis C with fewer side effects than older treatments. Its better known competitors Sovaldi and Harvoni were also backed by millions of dollars in payments to doctors, but were slightly lower on the list.

As ProPublica has previously reported, however, many of the drugs most aggressively promoted to doctors aren’t cures. Some are top sellers, but most are not. Less expensive generic alternatives are available for some of the drugs on the list.

With the addition of the 2015 data, our Dollars for Docs dataset now contains nearly $6.25 billion in medical industry payments made to more than 800,000 physicians in the U.S. Researchers can purchase the data through our Data Store.

Combining previous payment data with prescribing data from the federal Medicare program, we’ve shown that physicians who receive payments from the industry tend to prescribe more brand-name drugs than those who don’t. Several academic studies later had similar findings. We also recently reported that companies continue to work with thousands of doctors who have received disciplinary sanctions against their licenses.

The disclosures included in Dollars for Docs were required under the Physician Payments Sunshine Act, a part of the 2010 Affordable Care Act. Prior to the law’s implementation, ProPublica tracked payment disclosures for 17 companies, most of which were required to release them publicly under the terms of lawsuit settlements. You can find the archived Dollars for Docs data at https://projects.propublica.org/d4d-archive/.

A bill before Congress this year would have watered down some of the disclosure requirements in the Sunshine Act, but the proposal was stripped from the 21st Century Cures Act before it passed.

The long-time editor of a prestigious medical journal started his editorial on physicians’ conflicts of interest describing a fantasy that doctors treat patients using simply the best evidence and experience, rather than being influenced by money or self interest. This is, of course, nonsense. There is a reason pharmaceutical companies spend billions of dollars on influencing, educating, and entertaining of doctors around the world.

The vast majority of physicians in the United States take gifts from the pharmaceutical industry, and, ironically, cardiologists, whose practice centers around diseases that can largely be prevented and treated with lifestyle changes, receive the most payments of all. A previous compilation of surveys from the 80s and 90s found that, on average, doctors met with drug industry representatives about once a week. Today, your family doctor meets with drug company employees 16 times a month. There’s only 20 workdays a month, so that’s nearly every day.

What does the public think about this? Only about half even appear to know what’s going on. So, if 83% of doctors receive gifts, it is likely that a significant percentage of patients are not aware that their personal physician receives industry gifts. And, we’re talking more than just a Viagra paperweight or soap dispenser. For marketing, pharmaceutical companies spend $15,000 per physician every year, making conflicts of interest one of the most pressing problems in American health care.

How do doctors feel about it? Most generally approve of the gifts; however, tellingly, physicians do not want gift relationships made public. Physicians do not agree that it is inappropriate to accept gifts, but their reluctance to disclose the gift relationship to the public suggests that they must recognize that the public would not appreciate the practice. To analyze how physicians resolve this contradiction, researchers conducted a series of physician focus groups. It turns out physicians used a variety of denials and rationalizations; they avoided thinking about it, denied responsibility… Physicians readily acknowledged the inherent conflict of interest, but this didn’t stop them. In fact, some complained that the gifts were getting more modest. We tend to deny that we personally have any conflict of interest if a pharmaceutical company buys us a nice dinner. We tend to insist that it won’t affect our judgment in any way, as if drug companies just like wasting money on purpose. Most physicians contend that their colleagues are susceptible to the industry’s influence, but not them.

Though physicians don’t want these gift relationships to be public, that’s just too bad, because, thanks to Republican Senator Chuck Grassley, the Sunshine Act was inserted into Obamacare. And, so, for the first time, patients will now be able to see what, if any, financial ties their own doctor has. Doctors can’t hide anymore. This will give patients some insights when choosing a provider, and once the database goes live, law enforcement agencies can also investigate kickback cases to see who’s getting money from industry. Right now, it might just be embarrassing, but this could allow attorneys general to go after doctors to see the kinds of incentives they may be getting for writing a lot of prescriptions. And, the database is live right now. Go to openpaymentsdata.cms.gov/search or for a more user-friendly version, Propublica’s Dollars for Docs page. The drug industry spends billions trying to influence doctors, and, for the first time, you can see if your physician, or any physician, has their hand out.

Senator Grassley hoped this would help save our nation money. It could reduce healthcare costs if patients view such doctors as less trustworthy, and choose doctors less in bed with industry or could change physician behavior. They may want to avoid financial relationships with companies to guard against this patient distrust or becoming the target of an exposé or investigation. Or, they could just try to cover it up. This is from the American Academy of Family Physicians, advising physicians how to avoid getting burned by the Sunshine Act. For example, drug companies now have to report when they give doctors free meals valued at over $10. So, should family physicians just stop accepting free food from drug companies? No way—you just have to give the drug sales reps the right head count, so the meal cost dips below $10 per person.

The former long-time editor of the New England Journal of Medicine said it best: although the spotlight has been on disclosing doctors’ financial relationships with industry, the problem with conflicts of interest is not the lack of disclosure but the existence of the conflict itself. Rather than just disclosing them, the best approach to financial conflicts is to have none.