Marasmus is a form of severe malnutrition characterized by energy deficiency. It can occur in anyone with severe malnutrition but usually occurs in children.[1] A child with marasmus looks emaciated. Body weight is reduced to less than 62% of the normal (expected) body weight for the age.[2] Marasmus occurrence increases prior to age 1, whereas kwashiorkor occurrence increases after 18 months. It can be distinguished from kwashiorkor in that kwashiorkor is protein deficiency with adequate energy intake whereas marasmus is inadequate energy intake in all forms, including protein. This clear-cut separation of marasmus and kwashiorkor is however not always clinically evident as kwashiorkor is often seen in a context of insufficient caloric intake, and mixed clinical pictures, called marasmic kwashiorkor, are possible. Protein wasting in kwashiorkor generally leads to edema and ascites, while muscular wasting and loss of subcutaneous fat are the main clinical signs of marasmus.[citation needed]

The prognosis is better than it is for kwashiorkor[3] but half of severely malnourished children die due to unavailability of adequate treatment.[citation needed]

The word “marasmus” comes from the Greek μαρασμός marasmos (“withering”). 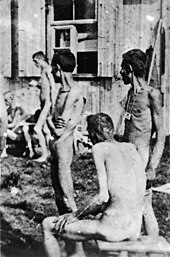 Marasmus is caused by a severe deficiency of nearly all nutrients, especially protein, carbohydrates and lipids, usually due to poverty and scarcity of food.[6] Viral, bacterial and parasitic infections can cause children to absorb few nutrients, even when consumption is adequate.[7] Marasmus can develop in children who have weakening conditions such as chronic diarrhea.[8]

Both the causes and complications of the disorder must be treated, including infections, dehydration, and circulation disorders, which are frequently lethal and lead to high mortality if ignored.[citation needed] Initially, the child is given dried skim-milk powder mixed with boiled water, followed by the addition of vegetable oils and, eventually, sugar. Refeeding must be done slowly to avoid refeeding syndrome. Once children start to recover, they should have more balanced diets which meet their nutritional needs. Children with marasmus commonly develop infections, and are consequently treated with antibiotics.[9] Ultimately, marasmus can progress to the point of no return when the body’s ability for protein synthesis is lost. At this point, attempts to correct the disorder by giving food or protein are futile.[citation needed]

Disability-adjusted life year for protein-energy malnutrition per 100,000 inhabitants in 2002.[10]

Persons in prisons, concentration camps, and refugee camps are affected more often due to poor nutrition.