Key components of the MAPK/ERK pathway. “P” represents phosphate, which communicates the signal. Top, epidermal growth factor (EGF) binds to the EGF receptor (EGFR) in the cell membrane, starting the cascade of signals. Further downstream, phosphate signal activates MAPK (also known as ERK). Bottom, signal enters the cell nucleus and causes transcription of DNA, which is then expressed as protein.

The MAPK/ERK pathway (also known as the Ras-Raf-MEK-ERK pathway) is a chain of proteins in the cell that communicates a signal from a receptor on the surface of the cell to the DNA in the nucleus of the cell.

The signal starts when a signaling molecule binds to the receptor on the cell surface and ends when the DNA in the nucleus expresses a protein and produces some change in the cell, such as cell division. The pathway includes many proteins, including MAPK (mitogen-activated protein kinases, originally called ERK, extracellular signal-regulated kinases),[citation needed] which communicate by adding phosphate groups to a neighboring protein, which acts as an “on” or “off” switch.

When one of the proteins in the pathway is mutated, it can become stuck in the “on” or “off” position, which is a necessary step in the development of many cancers. Components of the MAPK/ERK pathway were discovered when they were found in cancer cells. Drugs that reverse the “on” or “off” switch are being[when?] investigated as cancer treatments.[1]

Receptor-linked tyrosine kinases such as the epidermal growth factor receptor (EGFR) are activated by extracellular ligands, such as epidermal growth factor (EGF). Binding of EGF to the EGFR activates the tyrosine kinase activity of the cytoplasmic domain of the receptor. The EGFR becomes phosphorylated on tyrosine residues. Docking proteins such as GRB2 contain an SH2 domainthat binds to the phosphotyrosine residues of the activated receptor.[2] GRB2 binds to the guanine nucleotide exchange factorSOS by way of the two SH3 domains of GRB2. When the GRB2-SOS complex docks to phosphorylated EGFR, SOS becomes activated.[3] Activated SOS then promotes the removal of GDP from a member of the Ras subfamily (most notably H-Ras or K-Ras). Ras can then bind GTP and become active.

Apart from EGFR, other cell surface receptors that can activate this pathway via GRB2 include Trk A/B, Fibroblast growth factor receptor (FGFR) and PDGFR

RAF, and ERK (also known as MAPK) are both serine/threonine-selective protein kinases. MEK is a serine/tyrosine/threonine kinase.

In the technical sense, RAF, MEK, and MAPK are all mitogen-activated kinases, as is MNK (see below). MAPK was originally called “extracellular signal-regulated kinases” (ERKs) and “microtubule associated protein kinase” (MAPK). One of the first proteins known to be phosphorylated by ERK was a microtubule-associated protein(MAP). As discussed below, many additional targets for phosphorylation by MAPK were later found, and the protein was renamed “mitogen-activated protein kinase” (MAPK). The series of kinases from RAF to MEK to MAPK is an example of a protein kinase cascade. Such series of kinases provide opportunities for feedback regulation and signal amplification.

The 22q11, 1q42, and 19p13 genes are associated with schizophrenia, schizoaffective, bipolar, and migraines by affecting the ERK pathway. 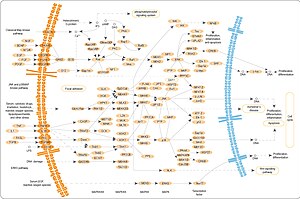 The ERK pathway plays an important role of integrating external signals from the presence of mitogens such as epidermal growth factor (EGF) into signaling events promoting cell growth and proliferation in many mammalian cell types. In a simplified model, the presence of mitogens and growth factors trigger the activation of canonical receptor tyrosine kinases such as EGFR leading to their dimerization and subsequent activation of the small GTPase Ras.[6]This then leads to a series of phosphorylation events downstream in the MAPK cascade (Raf-MEK-ERK) ultimately resulting in the phosphorylation and activation of ERK. The phosphorylation of ERK results in an activation of its kinase activity and leads to phosphorylation of its many downstream targets involved in regulation of cell proliferation. In most cells, some form of sustained ERK activity is required for cells to activate genes that induce cell cycle entry and suppress negative regulators of the cell cycle. One such important target is Cyclin D complexes with Cdk4 and Cdk6 (Cdk4/6) which are both phosphorylated by ERK.[7] The transition from G1 to S phase is coordinated by the activity of Cyclin D-Cdk4/6 and Cyclin E-Cdk2, which increase during late G1 phase as cells prepare to enter S-phase in response to mitogens. These cyclin-CDK complexes alter activity of the retinoblastoma protein (Rb) through means of differential phosphorylation. Cyclin D-Cdk4/6 mono-phosphorylates Rb, which prevents the cell from leaving the cell cycle and entering G0. [8] Cyclin E-Cdk2 hyper-phosphorylates Rb at many different phosphorylation sites. [8] This prevents Rb from sequestering the transcription factor E2F, which leads to the expression of S-phase entry genes including Cyclin E, Cyclin A2 and Emi1.[6] Hyperphosphorylation of Rb is switch-like and bistable, as 2-dimensional isoelectric focusing experiments have been unable to find intermediate levels of phosphorylation between mono and hyperphosphorylation [8]. This suggests that a positive feedback loop regulates Cyclin E-Cdk2 activity, though the exact mechanism remains unknown[8] . ERK1/2 activation downstream of mitogen induced Ras signaling is necessary and sufficient to remove this cell cycle block and allow cells to progress to S-phase in most mammalian cells. 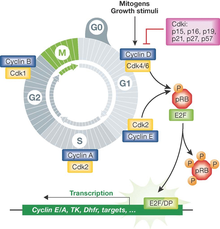 Schematic of mitogen input integrated into the cell cycle

Growth and mitogen signals are transmitted downstream of the ERK pathway are incorporated into multiple positive feedback loops to generate a bistable switch at the level of E2F activation.[9] This occurs due to three main interactions during late G1 phase. The first is a result of mitogen stimulation though the ERK leading to the expression of the transcription factor Myc, which is a direct activator of E2F.[7] The second pathway is a result of ERK activation leading to the accumulation of active complexes of Cyclin D and Cdk4/6 which destabilize Rb via phosphorylation and further serve to activate E2F and promote expression of its targets. Finally, these interactions are all reinforced by an additional positive feedback loop by E2F on itself, as its own expression leads to production of the active complex of Cyclin E and CDK2, which further serves to lock in a cells decision to enter S-phase. As a result, when serum concentration is increased in a gradual manner, most mammalian cells respond in a switch-like manner in entering S-phase. This mitogen stimulated, bistable E2F switch is exhibits hysteresis, as cells are inhibited from returning to G1 even after mitogen withdrawal post E2F activation.[10]

A general approach for approximating cellular pathway dynamics is to measure input/output relationships between different parts of the pathway. By treating populations of human cells with varying concentrations of EGF and analyzing the level of steady-state ERK activity that the populations eventually reached, the input-output relationship of EGF and ERK activity was determined to be ultrasensitive at the population level, with the largest changes in ERK activity occurring over a small range of EGF concentrations.[11]

However, while ERK effectors show a smooth unimodal shift with intermediate levels of activity at the population level, ERK activity is bimodal at the single-cell level. Monitoring the ERK activity of single cells with FRET biosensors have shown that ERK is activated in stochastic pulses, with higher EGF concentrations corresponding to more frequent pulses and higher levels of downstream ERK effectors like c-Myc and Fra1[11]. In addition, longer pulse length and an increased amount of time spent in the EGF “on” state correspond with earlier cellular entry into S phase.[11][10] Modifying the frequency of the pulses allows the bimodal ERK response at the single cell level to translate into the graded ERK response at the population level.

Various types of growth factors can also lead to unique ERK dynamics in other cell types effecting cell fate, suggesting the temporal dynamics of ERK activation is a general means of encoding unique gene expression programs by cells.[11][12] While downstream effects of the MAPK/ERK pathway vary from cell type to cell type, the dynamics of how ERK signals translate to cellular proliferation have been measured in both 184A1 (mammary epithelial) cells and SUM159 (breast cancer) cells. Researchers found the input-output relationship between ERK signalling and proliferation by varying levels of steady state ERK activity through titrating concentrations of MEK inhibitors, then measuring the resultant levels of proliferation markers. For both the epithelial and cancer cells, the input-output relationship between ERK signalling and proliferation was determined to be hyperbolic, with significant decreases in proliferation occurring only at very low steady state ERK activity in vitro. [11] This finding supports inhibition the MAPK/ERK signalling pathway at multiple nodes for breast cancer, in order to achieve the high levels of ERK inhibition needed for a significant response.[11]

Recent live cell imaging experiments in MCF10A and MCF7 cells have shown that a combination of mitogen signaling though ERK and stress signals through activation of p53 in mother cells contributes to the likelihood of whether newly formed daughter cells will immediately re-enter the cell cycle or enter quiescence (G0) preceding mitosis.[13] Rather than daughter cells starting with no key signaling proteins after division, mitogen/ERK induced Cyclin D1 mRNA and DNA damage induced p53 protein, both long lived factors in cells, can be stably inherited from mother cells after cell division. The levels of these regulators vary from cell to cell after mitosis and stoichiometry between them strongly influences cell cycle commitment though activation of Cdk2. Chemical perturbations using inhibitors of ERK signaling or inducers p53 signaling in mother cells suggest daughter cells with high levels of p53 protein and low levels of Cyclin D1 transcripts were shown to primarily enter G0 whereas cells with high Cyclin D1 and low levels of p53 are most likely to reenter the cell cycle. These results illustrate a form of encoded molecular memory though the history of mitogen signaling through ERK and stress response though p53.[14][15]

ERK cells can propagate between neighboring cells. In vitro, ERK pulses are propagated stochastically to surrounding cells, which contribute to density-dependent control of cellular proliferation. [16] The propagation pattern changes in multicellular tissues. When imaging the skin of mice expressing a FRET biosensor for ERK, researchers found spontaneous bursts of ERK activity in actively dividing skin. These bursts, nicknamed Spatial Propagation of Radial ERK Activity Distributions (SPREADs), start from small clusters of cells and radiate outwards through neighboring cells before eventually decaying, moving 50 μm over 30 min on average. In addition, they are dependent on activity of EGFR and the matrix metalloproteinases necessary for the secretion of EGFR ligands, revealing that EGFR activity is important for the cell-to-cell propagation.[17] Similar wave-like patterns of ERK activity have been observed at the edges of wounds, traveling in parallel to the wave edge. While these waves propagate at a similar speed to SPREADs, they persist for a longer time, suggesting that synchronization increases the propagation of the transduction wave. [17] ERK activity propagation has also been observed in neurons, visualized by expressing highly sensitive FRET biosensors for ERK. Activating NMDA ion channel receptors in a single dendrite causes ERK activity and dendrite growth not only in the stimulated dendrite but the surrounding dendrites as well.[18]

The first drug licensed to act on this pathway is sorafenib — a Raf kinase inhibitor.

Some MEK inhibitors: cobimetinib, CI-1040, PD0325901, Binimetinib (MEK162), selumetinib,[24] Trametinib(GSK1120212)[26] It has been found that acupoint-moxibustion has a role in relieving alcohol-induced gastric mucosal injury in a mouse model, which may be closely associated with its effects in up-regulating activities of the epidermal growth factor/ERK signal transduction pathway.[27]

RAF-ERK pathway is also involved in the pathophysiology of Noonan’s Syndrome, a polymalformative disease, where Simvastatin was proposed as a way to improve CNS-cognitive symptoms of the disorder.

Protein microarray analysis can be used to detect subtle changes in protein activity in signaling pathways.[28] The developmental syndromes caused by germline mutations in genes that alter the RAS components of the MAP/ERK signal transduction pathway are called RASopathies.