Treatments for the various forms of hair loss have only moderate success.[1] Three medications have evidence to support their use in male pattern hair loss: finasteride, dutasteride and minoxidil.[2] They typically work better to prevent further hair loss than to regrow lost hair.[2]

They may be used together when hair loss is progressive or further regrowth is desired after 12 months.[3] Other medications include ketoconazole, and in female androgenic alopecia spironolactone and flutamide.[4] Combinations of finasteride, minoxidil and ketoconazole are more effective than individual use.[5]

Minoxidil, applied topically, is widely used for the treatment of hair loss. It may be effective in helping promote hair growth in both men and women with androgenic alopecia.[6][7] About 40% of men experience hair regrowth after 3–6 months.[8] It is the only topical product that is FDA approved in America for androgenic hair loss.[6]However, increased hair loss has been reported.[9][10]

Finasteride is used to treat male pattern hair loss.[11] Treatment provides about 30% improvement in hair loss after six months of treatment, and effectiveness only persists as long as the drug is taken.[12] There is no good evidence for its use in women.[1] It may cause gynecomastia, erectile dysfunction and depression.[13]

Dutasteride is used off label for male pattern hair loss.[14]

There is tentative support for spironolactone in women.[1] Due to its feminising side effects and risk of infertility it is not often used by men.[15][16] It can also cause low blood pressure, high blood potassium, and abnormal heart rhythms. Also, women who are pregnant or trying to become pregnant generally cannot use the medication as it is a teratogen, and can cause ambiguous genitalia in newborn children.[17]

There is tentative evidence for flutamide in women; however, it is associated with relatively high rates of liver problems.[1] Like spironolactone, it is typically only used by women.[18

Ketoconazole may help in women.[1]

Hair transplantation is a surgical technique that moves individual hair follicles from a part of the body called the donor site to bald or balding part of the body known as the recipient site. It is primarily used to treat male pattern baldness. In this condition, grafts containing hair follicles that are genetically resistant to balding are transplanted to bald scalp. It is also used to restore eyelashes, eyebrows, beard hair, chest hair, and pubic hair and to fill in scars caused by accidents or surgery such as face-lifts and previous hair transplants. Hair transplantation differs from skin grafting in that grafts contain almost all of the epidermis and dermis surrounding the hair follicle, and many tiny grafts are transplanted rather than a single strip of skin.

Donor hair can be harvested in two different ways. Small grafts of naturally-occurring units of one to four hairs, called follicular units, can be moved to balding areas of the hair restoration. These follicular units are surgically implanted in the scalp in very close proximity to one another and in large numbers. The grafts are obtained in one or both of the two primary methods of surgical extraction, follicular unit transplantation, colloquially referred to as “strip harvesting”, or Follicular Unit Extraction (FUE), in which follicles are transplanted individually.

In FUT, a strip of skin containing many follicular units is extracted from the patient and dissected under a stereoscopic microscope. The site of the strip removal is stitched closed. Once divided into follicular unit grafts, each unit is individually inserted into small recipient sites made by an incision in the bald scalp. In the newer technique, roots are extracted from the donor area and divided into strips for transplantation. The strip, two to three millimeters thick, is isolated and transplanted to the bald scalp.[19]After surgery, a bandage is worn for two days to protect the stitched strip during healing. A small strip scar remains after healing, which can be covered by scalp hair growing over the scar.[20]

Scalp reduction is a surgical procedure in which the hairless region of the scalp of a bald man is reduced. This procedure can reduce the area of the scalp without hair.[21][22]

Studies have suggested electromagnetic radiation as a therapeutic growth stimulant in alopecia.[26

There have been advances in the fashion industry in wig design.

Certain hair shampoos and ointments visually thicken existing hair, without affecting the growth cycle.[27] There have also been developments in the fashion industry with wig design. The fashion accessory has also been shown to be a source of psychological support for women undergoing chemotherapy, with cancer survivors in one study describing their wig as a “constant companion”.[28] Other studies in women have demonstrated a more mixed psychosocial impact of hairpiece use.[29]

Specialized tattoos, commonly known as scalp micropigmentation, can mimic the appearance of a short buzzed haircut.[30][31]

Many people use unproven treatments,[2] but there is little evidence of the effectiveness of vitamins, minerals, or other dietary supplements regrowing hair or retaining hair.[1]

2008 and 2012 reviews found little evidence to support the use of special lights or lasers to treat hair loss.[1][32][33] Additionally none are approved by the FDA in America for this use.[33] Both laser and lights appear to be safe.[32]

A 2014 and 2016 review found tentative evidence of benefit for lasers.[34][35] While another 2014 review concluded that the results are mixed, have a high risk of bias, and that its effectiveness is unclear.[36]

Dietary supplements are not typically recommended.[32] There is only one small trial of saw palmetto which shows tentative benefit in those with mild to moderate androgenetic alopecia.[32] There is no evidence for biotin.[32] Evidence for most other produces is also insufficient. There was no good evidence for gingko, aloe vera, ginseng, bergamot, or hibiscus as of 2011.[37] While lacking both evidence and expert recommendation, there is a large market for hair growth supplements, especially for products that contain biotin. 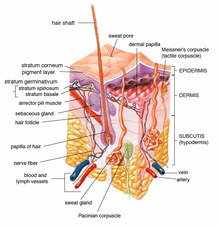 Hair follicle with mesenchymal dermal papilla, labelled at top, location of hair follicle stem cells and thought to be site of action of DHT.

Several lines of evidence support the dermal papilla of the hair follicle as the androgenic target for hair loss prevention and reversal.[38][unreliable medical source?] Type 1 and 2 5α reductase enzymes are present at pilosebaceous units in papillae of individual hair follicles. They catalyse formation of the androgens testosterone and DHT, which in turn regulate hair growth. Androgens have different effects at different follicles: they stimulate IGF-1 at facial hair, causing hair regrowth, but stimulate TGF β1, TGF β2, dickkopf1 and IL-6 at the scalp, causing hair follicle miniaturisation.[39]

Female androgenic alopecia is characterized by diffuse crown thinning without hairline recession, and like its male counterpart rarely leads to total hair loss.[40] Finasteride and minoxidil are usually first line therapy for its treatment. Other options include topical or systemic spironolactone or flutamide, although they have a high incidence of feminising side effects and are better tolerated in female androgenic hair loss.

More advanced cases may be resistant or unresponsive to medical therapy, however, and require hair transplantation. Naturally-occurring units of one to four hairs, called follicular units, are excized and moved to areas of hair restoration. These follicular units are surgically implanted in the scalp in close proximity and in large numbers. The grafts are obtained from either Follicular Unit Transplantation (FUT) – colloquially referred to as “strip harvesting” – or Follicular Unit Extraction (FUE). In the former, a strip of skin with follicular units is extracted and dissected into individual follicular unit grafts. The surgeon then implants the grafts into small incisions, called recipient sites.[20][41] Specialized scalp tattoos can also mimic the appearance of a short buzzed haircut.[42][43] Androgenic alopecia also occurs in women, and more often presents as diffuse thinning without hairline recession. Like its male counterpart, the condition rarely leads to total hair loss. Treatment options are similar to those for men, although topical or systemic estrogen is used more often.[40][44]

Latanoprost and bimatoprost are specific PGF2a analogues applied topically, and have been found to lengthen eyelashes,[45][46] darken hair pigmentation[47] and elongate hair.[4] Bimatoprost is available as treatment for eyelash growth.[48] Latanoprost has shown ability to promote scalp hair density and pigmentation,[49] and is theorized to function at the dermal papilla.[50] A study found latanoprost ineffective on eyelashes in a patient with alopecia areata.[51] It has also been found ineffective in treatment of eyebrow hair loss.[52]

Estrogens are indirect anti-androgens and can be used to treat androgenetic hair loss in women with oral contraceptives. Systemic estrogen increases SHBG, which binds androgens, including testosterone and DHT, in turn reducing their bioavailability. Topical formulations are available in Europe.[37] Hair follicles have estrogen receptors and it is theorized that topical compounds act on them directly to promote hair growth and antagonize androgen action. Large clinical studies showing effectiveness are absent. Topical treatment is also usually unavailable in North America.[4]

There is tentative evidence for cyproterone acetate in women.[1]

Reviews in 2013 and 2017 on the use of platelet-rich plasma (PRP) to regrow hair found insufficient evidence to draw clear conclusions.[58][59]

Although follicles were previously thought gone in areas of complete baldness, they are more likely dormant, as recent studies have shown the scalp contains the stem cells from which the follicles arose.[60] Research on these follicular stem cells may lead to successes in treating baldness through hair multiplication (HM), also known as hair cloning.

Per a May 2015 review, no successful strategy to generate human hair follicles, for hair regrowth, from adult stem cells has yet been reported.[61] However, in April 2016, scientists from Japan published results of their work in which they created human skin from induced pluripotent stem cells; implanted into laboratory mice, the cells generated skin with hair and glands.[62]

From 2005 to 2007 Curis and Procter & Gamble collaborated on developing a topical hedgehog agonist for hair loss; the agent did not meet safety standards, and the program was terminated.[63][64] In 2008 researchers at the University of Bonn announced they have found the genetic basis of two distinct forms of inherited hair loss. They found the gene P2RY5 causes a rare, inherited form of hair loss called hypotrichosis simplex. It is the first receptor in humans known to play a role in hair growth.[65][66][67] Researchers found that disruption of the gene SOX21 in mice caused cyclical hair loss. Research has suggested SOX21 as a master regulator of hair shaft cuticle differentiation, with its disruption causing cyclical alopecia in mice models.[68] Deletion of SOX21 dramatically affects hair lipids.[69]