At sufficiently high flux levels, various bands of electromagnetic radiation have been found to cause deleterious health effects in people. Electromagnetic radiation can be classified into two types: ionizing radiation and non-ionizing radiation, based on the capability of a single photon with more than 10 eV energy to ionize oxygen or break chemical bonds.[1] Extreme ultraviolet and higher frequencies, such as X-rays or gamma rays are ionizing, and these pose their own special hazards: see radiation and radiation poisoning. The last quarter of the twentieth century saw a dramatic increase in the number of devices emitting non-ionizing radiation in all segments of society, which resulted in an elevation of health concerns by researchers and clinicians, and an associated interest in government regulation for safety purposes. In the United States, this has resulted in legislation such as the Radiation Control for Health and Safety Act of 1968 and the Occupational Safety and Health Act of 1970.[2] By far the most common health hazard of radiation is sunburn, which causes over one million new skin cancers annually.[3]

Sufficiently strong radiation can induce current capable of delivering an electric shock to persons or animals.[citation needed] It can also overload and destroy electrical equipment.[4] The radio emissions from transmission lines have occasionally caused shocks to construction workers from nearby equipment, causing OSHA to establish standards for proper handling.[5]

The induction of currents by oscillating magnetic fields is the way in which solar storms disrupt the operation of electrical and electronic systems, causing damage to and even the explosion of power distribution transformers,[6] blackouts (as occurred in 1989), and interference with electromagnetic signals (e.g. radio, TV, and telephone signals).[7]

Extremely high power[vague] electromagnetic radiation can cause electric currents strong enough to create sparks (electrical arcs) when an induced voltage exceeds the breakdown voltage of the surrounding medium (e.g. air at 3.0 MV/m).[8] These sparks can then ignite nearby flammable materials or gases, which can be especially hazardous in the vicinity of explosives or pyrotechnics.

This risk is commonly referred to as Hazards of Electromagnetic Radiation to Ordnance (HERO) by the United States Navy (USN). United States Military Standard 464A (MIL-STD-464A) mandates assessment of HERO in a system, but USN document OD 30393 provides design principles and practices for controlling electromagnetic hazards to ordnance.[9] The risk related to fueling is known as Hazards of Electromagnetic Radiation to Fuel (HERF). NAVSEA OP 3565 Vol. 1 could be used to evaluate HERF, which states a maximum power density of 0.09 W/m² for frequencies under 225 MHz (i.e. 4.2 meters for a 40 W emitter).[9]

The best understood[citation needed] biological effect of electromagnetic fields is to cause dielectric heating. For example, touching or standing around an antenna while a high-power transmitter is in operation can cause severe burns. These are exactly the kind of burns that would be caused inside a microwave oven.[10] This heating effect varies with the power and the frequency of the electromagnetic energy, as well as the distance to the source. The eyes and testes are particularly susceptible to radio frequency heating due to the paucity of blood flow in these areas that could otherwise dissipate the heat buildup.[11]

Radio frequency (RF) energy at power density levels of 1-10 mW/cm2 or higher can cause measurable heating of tissues. Typical RF energy levels encountered by the general public are well below the level needed to cause significant heating, but certain workplace environments near high power RF sources may exceed safe exposure limits.[11] A measure of the heating effect is the specific absorption rate or SAR, which has units of watts per kilogram (W/kg). The IEEE[12] and many national governments have established safety limits for exposure to various frequencies of electromagnetic energy based on SAR, mainly based on ICNIRP Guidelines,[13] which guard against thermal damage.

Fluorescent light bulbs and tubes internally produce ultraviolet light. Normally this is converted to visible light by the phosphor film inside a protective coating. When the film is cracked by mishandling or faulty manufacturing then UV may escape at levels that could cause sunburn or even skin cancer.[19][20] 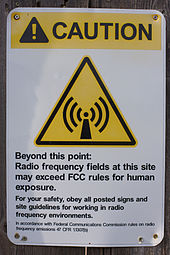 Warning sign next to a transmitter with high field strengths

While the most acute exposures to harmful levels of electromagnetic radiation are immediately realized as burns, the health effects due to chronic or occupational exposure may not manifest effects for months or years

High-power, extremely-low-frequency RF with electric field levels in the low kV/m range are known to induce perceivable currents within the human body that create an annoying tingling sensation. These currents will typically flow to ground through a body contact surface such as the feet, or arc to ground where the body is well insulated.[21]

Shortwave (1.6 to 30 MHz) diathermy can be used as a therapeutic technique for its analgesic effect and deep muscle relaxation, but has largely been replaced by ultrasound. Temperatures in muscles can increase by 4–6 °C, and subcutaneous fat by 15 °C. The FCC has restricted the frequencies allowed for medical treatment, and most machines in the US use 27.12 MHz.[22] Shortwave diathermy can be applied in either continuous or pulsed mode. The latter came to prominence because the continuous mode produced too much heating too rapidly, making patients uncomfortable. The technique only heats tissues that are good electrical conductors, such as blood vesselsand muscle. Adipose tissue (fat) receives little heating by induction fields because an electrical current is not actually going through the tissues.[23]

Studies have been performed on the use of shortwave radiation for cancer therapy and promoting wound healing, with some success. However, at a sufficiently high energy level, shortwave energy can be harmful to human health, potentially causing damage to biological tissues.[24] The FCC limits for maximum permissible workplace exposure to shortwave radio frequency energy in the range of 3–30 MHz has a plane-wave equivalent power density of (900/f2) mW/cm2 where f is the frequency in MHz, and 100 mW/cm2 from 0.3–3.0 MHz. For uncontrolled exposure to the general public, the limit is 180/f2 between 1.34–30 MHz.[11]

This designation of mobile phone signals as “possibly carcinogenic to humans” by the World Health Organization (WHO) (e.g. its IARC, see below) has often been misinterpreted as indicating that of some measure of risk has been observed – however the designation indicates only that the possibility could not be conclusively ruled out using the available data.[25]

In 2011, International Agency for Research on Cancer (IARC) classified mobile phone radiation as Group 2B “possibly carcinogenic” (rather than Group 2A “probably carcinogenic” nor the “is carcinogenic” Group 1). That means that there “could be some risk” of carcinogenicity, so additional research into the long-term, heavy use of mobile phones needs to be conducted.[26] The WHO concluded in 2014 that “A large number of studies have been performed over the last two decades to assess whether mobile phones pose a potential health risk. To date, no adverse health effects have been established as being caused by mobile phone use.”[27][28]

Since 1962, the microwave auditory effect or tinnitus has been shown from radio frequency exposure at levels below significant heating.[29] Studies during the 1960s in Europe and Russia claimed to show effects on humans, especially the nervous system, from low energy RF radiation; the studies were disputed at the time.[30][31]:427–30)

Recent technology advances in the developments of millimeter wave scanners for airport security and WiGig for personal area networks have opened the 60 GHz and above microwave band to SAR exposure regulations. Previously, microwave applications in these bands were for point-to-point satellite communication with minimal human exposure. Radiation levels in the millimeter wavelength represent the high microwave band or close to Infrared wavelengths.[32)

Infrared wavelengths longer than 750 nm can produce changes in the lens of the eye. Glassblower’s cataract is an example of a heat injury that damages the anterior lenscapsule among unprotected glass and iron workers. Cataract-like changes can occur in workers who observe glowing masses of glass or iron without protective eyewear for prolonged periods over many years.[33]

Another important factor is the distance between the worker and the source of radiation. In the case of arc welding, infrared radiation decreases rapidly as a function of distance, so that farther than three feet away from where welding takes place, it does not pose an ocular hazard anymore but, ultraviolet radiation still does. This is why welders wear tinted glasses and surrounding workers only have to wear clear ones that filter UV.

Moderate and high-power lasers are potentially hazardous because they can burn the retina of the eye, or even the skin. To control the risk of injury, various specifications – for example ANSI Z136 in the US, and IEC 60825 internationally – define “classes” of lasers depending on their power and wavelength.[citation needed]

As with its infrared and ultraviolet radiation dangers, welding creates an intense brightness in the visible light spectrum, which may cause temporary flash blindness. Some sources state that there is no minimum safe distance for exposure to these radiation emissions without adequate eye protection.[34]

Ultraviolet emission from sunlight can cause sunburn within hours of exposure, and the severity increases with the duration of exposure. This effect is a response of the skin to erythema, which is caused by a sufficient strong dose of UV-B. The Sun’s UV output is divided into UV-A and UV-B: solar UV-A flux is 100 times that of UV-B, but the erythema response is 1,000 times higher for UV-B. This exposure can increase at higher altitudes and when reflected by snow, ice, or sand. The UV-B flux is 2–4 times greater during the middle 4–6 hours of the day, and is not significantly absorbed by cloud cover or up to a meter of water.[35]

Ultraviolet light, specifically UV-B, has been shown to cause cataracts and there is some evidence that sunglasses worn at an early age can slow its development in later life.[36] Most UV light from the sun is filtered out by the atmosphere and consequently airline pilots often have high rates of cataracts because of the increased levels of UV radiation in the upper atmosphere.[37] It is hypothesized that depletion of the ozone layer and a consequent increase in levels of UV light on the ground may increase future rates of cataracts.[38] Note that the lens filters UV light, so once that is removed via surgery, one may be able to see UV light.[39]

Prolonged exposure to ultraviolet radiation from the sun can lead to melanoma and other skin malignancies.[3] Clear evidence establishes ultraviolet radiation, especially the non-ionizing medium wave UVB, as the cause of most non-melanoma skin cancers, which are the most common forms of cancer in the world.[3] UV rays can also cause wrinkles, liver spots, moles, and freckles. In addition to sunlight, other sources include tanning beds, and bright desk lights. Damage is cumulative over one’s lifetime, so that permanent effects may not be evident for some time after exposure.[40]

Ultraviolet radiation of wavelengths shorter than 300 nm (actinic rays) can damage the corneal epithelium. This is most commonly the result of exposure to the sun at high altitude, and in areas where shorter wavelengths are readily reflected from bright surfaces, such as snow, water, and sand. UV generated by a welding arc can similarly cause damage to the cornea, known as “arc eye” or welding flash burn, a form of photokeratitis.[41]