Humans use one of two types of defecation postures to defecate: squatting, or sitting. People use the squatting postures when using squat toilets or when defecating in the open in the absence of toilets. The sitting posture on the other hand is used in toilets that have a pedestal or “throne”, where users generally lean forward or sit at 90-degrees to a toilet seat.

In general, the preferred posture is largely a cultural decision. People adapt their defecation posture to the toilet type available to them, e.g. while travelling or if moving to another country. 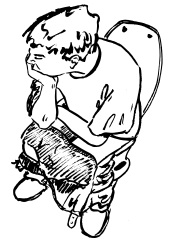 An example of the sitting posture.

The sitting defecation posture involves sitting with hips and knees at approximately right angles, as on a chair. So-called “Western-style” flush toilets and also many types of dry toilets are designed to be used in a sitting posture.

Sitting toilets only came into widespread use in Europe in the nineteenth century.[1]

Special devices exist in the form of “wrap-around foot stools” to allow users of western-style toilets to defecate in a posture that is somewhat similar to squatting.[2]

Straining in the squatting position while defecating may increase the risk of severe hemorrhoids.[3] Prolonged and repeated straining on a sitting toilet has the same effect.[3]

People who are not used to squat toilets, as well as overweight people, people with disabilities, and elderly people tend to find squatting as a defecation posture difficult, and may therefore prefer sitting.[citation needed]