Cell biology  is a branch of biology that studies the structure and function of the cell, which is the basic unit of life.[1] Cell biology is concerned with the physiological properties, metabolic processes, signaling pathways, life cycle, chemical composition and interactions of the cell with their environment. This is done both on a microscopic and molecular level as it encompasses prokaryotic cells and eukaryotic cells. Knowing the components of cells and how cells work is fundamental to all biological sciences; it is also essential for research in bio-medical fields such as cancer, and other diseases. Research in cell biology is closely related to genetics, biochemistry, molecular biology, immunology and cytochemistry .[2]

Cells, which were once invisible to the naked eye, were first seen in 17th century Europe with the invention of the compound microscope. Robert Hooke was the first person to term the building block of all living organisms as “cells” after looking at cork.[3] The cell theory states that all living things are made up of cells.[4] The theory also states that both plants and animals are composed of cells which was confirmed by plant scientist, Matthias Schleiden and animal scientist, Theodor Schwann in 1839.[4] 19 years later, Rudolf Virchow contributed to the cell theory, arguing that all cells come from the division of preexisting cells.[4] In recent years, there have been many studies which question the cell theory. Scientists have struggled to decide whether viruses are alive or not. Viruses lack common characteristics of a living cell, such as membranes, cell organelles, and the ability to reproduce by themselves.[5] Viruses range from 0.005 to 0.03 micrometers in size whereas bacteria range from 1-5 micrometers.[6] Modern day cell biology research looks at different ways to culture and manipulate cells outside of a living body to further research in human anatomy and physiology, to derive treatments and other medications, etc. The techniques by which cells are studied have evolved. Advancement in microscopic techniques and technology such as fluorescence microscopy, phase-contrast microscopy, dark field microscopy, confocal microscopy, cytometry, transmission electron microscopy, etc. have allowed scientists to get a better idea of the structure of cells.[7] 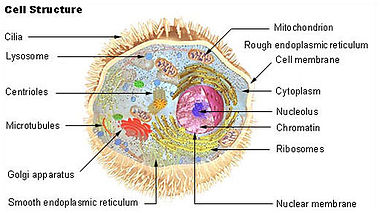 The generalized structure and molecular components of a cell

The study of the cell is done on a molecular level; however, most of the processes within the cell are made up of a mixture of small organic molecules, inorganic ions, hormones, and water. Approximately 75-85% of the cell’s volume is due to water making it an indispensable solvent as a result of its polarity and structure.[11] These molecules within the cell, which operate as substrates, provide a suitable environment for the cell to carry out metabolic reactions and signalling. The cell shape varies among the different types of organisms, and are thus then classified into two categories: eukaryotes and prokaryotes. In the case of eukaryotic cells – which are made up of animal, plant, fungi, and protozoa cells – the shapes are generally round and spherical or oval[9] while for prokaryotic cells – which are composed of bacteria and archaea – the shapes are: spherical (cocci), rods (bacillus), curved (vibrio), and spirals (spirochetes).[12]

Cell biology focuses more on the study of eukaryotic cells, and their signalling pathways, rather than on prokaryotes which is covered under microbiology. The main constituents of the general molecular composition of the cell includes: proteins and lipids which are either free flowing or membrane bound, along with different internal compartments known as organelles. This environment of the cell is made up of hydrophilic and hydrophobicregions which allows for the exchange of the above-mentioned molecules and ions. The hydrophilic regions of the cell are mainly on the inside and outside of the cell, while the hydrophobic regions are within the phospholipid bilayer of the cell membrane. The cell membrane consists of lipids and proteins which accounts for its hydrophobicity as a result of being non-polar substances.[11] Therefore, in order for these molecules to participate in reactions, within the cell, they need to be able to cross this membrane layer to get into the cell. They accomplish this process of gaining access to the cell via: osmotic pressure, diffusion, concentration gradients, and membrane channels. Inside of the cell are extensive internal sub-cellular membrane-bounded compartments called organelles.

The growth process of the cell does not refer to the size of the cell, but instead the density of the number of cells present in the organism at a given time. Cell growthpertains to the increase in the number of cells present in an organism as it grows and develops; as the organism gets larger so too does the number of cells present. Cells are the foundation of all organisms, they are the fundamental unit of life. The growth and development of the cell are essential for the maintenance of the host, and survival of the organisms. For this process the cell goes through the steps of the cell cycle and development which involves cell growth, DNA replication, cell division, regeneration, specialization, and cell death. The cell cycle is divided into four distinct phases, G1, S, G2, and M. The G phases – which is the cell growth phase – makes up approximately 95% of the cycle.[13] The proliferation of cells is instigated by progenitors, the cells then differentiate to become specialized, where specialized cells of the same type aggregate to form tissues, then organs and ultimately systems.[11] The G phases along with the S phase – DNA replication, damage and repair – are considered to be the interphase portion of the cycle. While the M phase (mitosis and cytokinesis) is the cell division portion of the cycle.[13] The cell cycle is regulated by a series of signalling factors and complexes such as cyclin-dependent kinases and p53, to name a few. When the cell has completed its growth process, and if it is found to be damaged or altered, it undergoes cell death, either by apoptosis or necrosis, in order to eliminate the threat it can cause to the organism’s survival.