Cell adhesion is the process by which cells interact and attach to neighbouring cells through specialised molecules of the cell surface. This process can occur either through direct contact between cell surfaces or indirect interaction, where cells attach to surrounding extracellular matrix, a gel-like structure containing molecules released by cells into spaces between them.[1] Cells adhesion occurs from the interactions between cell-adhesion molecules (CAMs),[2]transmembrane proteins located on the cell surface. Cell adhesion link cells in different ways and can be involved in signal transduction for cells to detect and respond to changes in the surroundings.[1][3] Other cellular processes regulated by cell adhesion include cell migration and tissue development in multicellular organisms.[4] Alterations in cell adhesion can disrupt important cellular processes and lead to a variety of diseases, including cancer[5][6] and arthritis.[7] Cell adhesion is also essential for infectious organisms, such as bacteria or viruses, to cause diseases.[8][9] 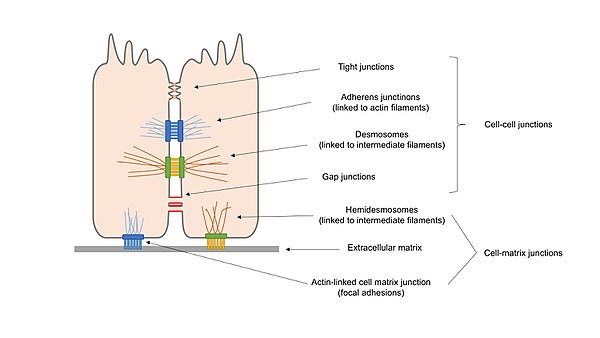 CAMs are classified into four major families: integrins, immunoglobulin (Ig) superfamily, cadherins, and selectins.[2] Each of these adhesion molecules has a different function and recognizes different ligands. Cadherins and immunoglobulins are homophilic CAMs, as they directly bind to the same type of CAMs on another cell, while integrins and selectins are heterophilic CAMs that bind to different types of CAMs.[2] Defects in cell adhesion are usually attributable to defects in expression of CAMs.

In multicellular organisms, bindings between CAMs allow cells to adhere to one another and creates structures called cell junctions. According to their functions, the cell junctions can be classified as:[1]

Cell–cell junctions can occur in different forms. In anchoring junctions between cells such as adherens junctions and desmosomes, the main CAMs present are the cadherins. This family of CAMs are membrane proteins that mediate cell–cell adhesion through its extracellular domains and require extracellular Ca2+ ions to function correctly.[2] Cadherins forms homophilic attachment between themselves, which results in cells of a similar type sticking together and can lead to selective cell adhesion, allowing vertebrate cells to assemble into organised tissues.[1] Cadherins are essential for cell–cell adhesion and cell signalling in multicellular animals and can be separated into two types: classical cadherins and non-classical cadherins.[2]

Desmosomes are structurally similar to adherens junctions but composed of different components. Instead of classical cadherins, non-classical cadherins such as desmogleins and desmocollins act as adhesion molecules and they are linked to intermediate filaments instead of actin filaments.[12] No catenin is present in desmosomes as intracellular domains of desmosomal cadherins interact with desmosomal plaque proteins, which form the thick cytoplasmic plaques in desmosomes and link cadherins to intermediate filaments.[13]Desmosomes provides strength and resistance to mechanical stress by unloading forces onto the flexible but resilient intermediate filaments, something that cannot occur with the rigid actin filaments.[12] This makes desmosomes important in tissues that encounter high levels of mechanical stress, such as heart muscle and epithelia, and explains why it appears frequently in these types of tissues.

Tight junctions are normally present in epithelial and endothelial tissues, where they seal gaps and regulate paracellular transport of solutes and extracellular fluids in these tissues that function as barriers.[14] Tight junction is formed by transmembrane proteins, including claudins, occludins and tricellulins, that bind closely to each other on adjacent membranes in a homophilic manner.[1] Similar to anchoring junctions, intracellular domains of these tight junction proteins are bound with scaffold proteinsthat keep these proteins in clusters and link them to actin filaments in order to maintain structure of the tight junction.[15] Claudins, essential for formation of tight junctions, form paracellular pores which allow selective passage of specific ions across tight junctions making the barrier selectively permeable.[14]

Gap junctions are composed of channels called connexons, which consist of transmembrane proteins called connexins clustered in groups of six.[16] Connexons from adjacent cells form continuous channels when they come into contact and align with each other. These channels allow transport of ions and small molecules between cytoplasm of two adjacent cells, apart from holding cells together and provide structural stability like anchoring junctions or tight junctions.[1] Gap junction channels are selectively permeable to specific ions depending on which connexins form the connexons, which allows gap junctions to be involved in cell signalling by regulating the transfer of molecules involved in signalling cascades.[17] Channels can respond to many different stimuli and are regulated dynamically either by rapid mechanisms, such as voltage gating, or by slow mechanism, such as altering numbers of channels present in gap junctions.[16]

Selectins are a family of specialised CAMs involved in transient cell–cell adhesion occurring in the circulatory system. They mainly mediate the movement of white blood cells (leukocytes) in the bloodstream by allowing the white blood cells to “roll” on endothelial cells through reversible bindings of selections.[18] Selectins undergo heterophilic bindings, as its extracellular domain binds to carbohydrates on adjacent cells instead of other selectins, while it also require Ca2+ ions to function, same as cadherins.[1] cell–cell adhesion of leukocytes to endothelial cells is important for immune responses as leukocytes can travel to sites of infection or injury through this mechanism.[19] At these sites, integrins on the rolling white blood cells are activated and bind firmly to the local endothelial cells, allowing the leukocytes to stop migrating and move across the endothelial barrier.[19]

The immunoglobulin superfamily (IgSF) is one of the largest superfamily of proteins in the body and it contains many diverse CAMs involved in different functions. These transmembrane proteins have one or more immunoglobulin-like domains in their extracellular domains and undergo calcium-independent binding with ligands on adjacent cells.[20] Some IgSF CAMs, such as neural cell adhesion molecules (NCAMs), can perform homophilic binding while others, such as intercellular cell adhesion molecules(ICAMs) or vascular cell adhesion molecules (VCAMs) undergo heterophilic binding with molecules like carbohydrates or integrins.[21] Both ICAMs and VCAMs are expressed on vascular endothelial cells and they interact with integrins on the leukocytes to assist leukocyte attachment and its movement across the endothelial barrier.[21]

Hemidesmosomes diagram showing interaction between integrins and laminin, including how integrins are linked to keratin intermediate filaments

Pathogenic fungi use adhesion molecules present on its cell wall to attach, either through protein-protein or protein-carbohydrate interactions, to host cells[30] or fibronectins in the extracellular matrix.[31]

Prokaryotes have adhesion molecules on their cell surface termed bacterial adhesins, apart from using its pili (fimbriae) and flagella for cell adhesion.[8] Adhesins can recognise a variety of ligands present on the host cell surfaces and also components in the extracellular matrix. These molecules also control host specificity and regulate tropism (tissue- or cell-specific interactions) through their interaction with their ligands.[32]

Viruses also have adhesion molecules required for viral binding to host cells. For example, influenza virus has a hemagglutinin on its surface that is required for recognition of the sugar sialic acid on host cell surface molecules.[33] HIV has an adhesion molecule termed gp120 that binds to its ligand CD4, which is expressed on lymphocytes.[34] Viruses can also target components of cell junctions to enter host cells, which is what happens when the hepatitis C virus targets occludins and claudins in tight junctions to enter liver cells.[9]

Dysfunction of cell adhesion occurs during cancer metastasis. Loss of cell–cell adhesion in metastatic tumour cells allows them to escape their site of origin and spread through the circulatory system.[5] One example of CAMs deregulated in cancer are cadherins, which are inactivated either by genetic mutations or by other oncogenic signalling molecules, allowing cancer cells to migrate and be more invasive.[6] Other CAMs, like selectins and integrins, can facilitate metastasis by mediating cell–cell interactions between migrating metastatic tumour cells in the circulatory system with endothelial cells of other distant tissues.[35] Due to the link between CAMs and cancer metastasis, these molecules could be potential therapeutic targets for cancer treatment.

There are also other human genetic diseases caused by an inability to express specific adhesion molecules. An example is leukocyte adhesion deficiency-I (LAD-I), where expression of the β2 integrin subunit is reduced or lost.[36] This leads to reduced expression of β2 integrin heterodimers, which are required for leukocytes to firmly attach to the endothelial wall at sites of inflammation in order to fight infections.[37] Leukocytes from LAD-I patients are unable to adhere to endothelial cells and patients exhibit serious episodes of infection that can be life-threatening.

An autoimmune disease called pemphigus is also caused by loss of cell adhesion, as it results from autoantibodies targeting a person’s own desmosomal cadherins which leads to epidermal cells detaching from each other and causes skin blistering.[38]

Pathogenic microorganisms, including bacteria, viruses and protozoans, have to first adhere to host cells in order to infect and cause diseases. Anti-adhesion therapy can be used to prevent infection by targeting adhesion molecules either on the pathogen or on the host cell.[39] Apart from altering the production of adhesion molecules, competitive inhibitors that bind to adhesion molecules to prevent binding between cells can also be used, acting as anti-adhesive agents.[40]