Anismus (or dyssynergic defecation) is the failure of the normal relaxation of pelvic floor muscles during attempted defecation. It can occur in both children and adults, and in both men and women (although it is more common in women). It can be caused by physical defects or it can occur for other reasons or unknown reasons. Anismus that has a behavioral cause could be viewed as having similarities with parcopresis, or psychogenic fecal retention.

Symptoms include tenesmus (the sensation of incomplete emptying of the rectum after defecation has occurred) and constipation. Retention of stool may result in fecal loading (retention of a mass of stool of any consistency) or fecal impaction(retention of a mass of hard stool). This mass may stretch the walls of the rectum and colon, causing megarectum and/or megacolon, respectively. Liquid stool may leak around a fecal impaction, possibly causing degrees of liquid fecal incontinence. This is usually termed encopresis or soiling in children, and fecal leakage, soiling or liquid fecal incontinence in adults.

Some researchers have suggested that anismus is an over-diagnosed condition, since the standard investigations or digital rectal examination and anorectal manometry were shown to cause paradoxical sphincter contraction in healthy controls, who did not have constipation or incontinence.[1] Due to the invasive and perhaps uncomfortable nature of these investigations, the pelvic floor musculature is thought to behave differently than under normal circumstances. These researchers went on to conclude that paradoxical pelvic floor contraction is a common finding in healthy people as well as in people with chronic constipation and stool incontinence, and it represents a non-specific finding or laboratory artifact related to untoward conditions during examination, and that true anismus is actually rare.

(Derived by extrapolation with the term vaginismus, which in turn is from the Latin vagina – “sheath” + spasmus – “spasm”)

Many terms have been used synonymously to refer to this condition, some inappropriately. The term “anismus” has been criticised as it implies a psychogenic cause.[3] As stated in the Rome II criteria, the term “dyssynergic defecation” is preferred to “pelvic floor dyssynergia” because many patients with dyssynergic defecation do not report sexual or urinary symptoms,[4] meaning that only the defecation mechanism is affected.

Several definitions have been offered:

The Rome classification subdivides functional defecation disorders into 3 types,[4] however the symptoms the patient experiences are identical.[11]

It can be seen from the above classification that many of the terms that have been used interchangeably with anismus are inappropriately specific and neglect the concept of impaired propulsion. Similarly, some of the definitions that have been offered are also too restrictive. Symptoms include: 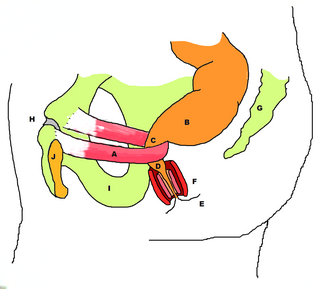 The puborectalis muscle is one of the pelvic floor muscles. It is skeletal muscle and is therefore under voluntary control. The puborectalis originates on the posterior aspect of the pubic bone, and runs backwards, looping around the bowel.

As these muscles are under voluntary control, the failure of muscular relaxation or paradoxical contraction that is characteristic of anismus can be thought of as either maladaptive behavior or a loss of voluntary control of these muscles. Others claim that puborectalis can become hypertrophied (enlarged) or fibrosis (replacement of muscle tissue with a more fibrous tissue), which reduces voluntary control over the muscle.

Anismus could be thought of as the patient “forgetting” how to push correctly, i.e. straining against a contracted pelvic floor, instead of increasing abdominal cavity pressures and lowering pelvic cavity pressures. It may be that this scenario develops due to stress. For example, one study reported that anismus was strongly associated with sexual abuse in women.[16] One paper stated that events such as pregnancy, childbirth, gynaecological descent or neurogenic disturbances of the brain-bowel axis could lead to a “functional obstructed defecation syndrome” (including anismus).[7] Anismus may develop in persons with extrapyramidal motor disturbance due to Parkinson’s disease.[17] This represents a type of focal dystonia.[18] Anismus may also occur with anorectal malformation, rectocele,[19] rectal prolapse[20] and rectal ulcer.[20]

In many cases however, the underlying pathophysiology in patients presenting with obstructed defecation cannot be determined.[21]

Some authors have commented that the “puborectalis paradox” and “spastic pelvic floor” concepts have no objective data to support their validity. They state that “new evidence showing that defecation is an integrated process of colonic and rectal emptying suggests that anismus may be much more complex than a simple disorder of the pelvic floor muscles.”[21]

Persistent failure to fully evacuate stool may lead to retention of a mass of stool in the rectum (fecal loading), which can become hardened, forming a fecal impaction or even fecoliths.

Liquid stool elements may leak around the retained fecal mass, which may lead to paradoxical diarrhoea and/or fecal leakage (usually known as encopresis in children and fecal leakage in adults).[22][23][24][25]

The walls of the rectum may become stretched, known as megarectum.[27]

The Rome classification diagnostic criteria for functional defecation disorders is as follows:[4]

The diagnostic criteria for dyssynergic defecation is given as “inappropriate contraction of the pelvic floor or less than 20% relaxation of basal resting sphincter pressure with adequate propulsive forces during attempted defecation.”[4]

The Rome criteria recommend that anorectal testing is not usually indicated in patients with symptoms until patients have failed conservative treatment (e.g., increased dietary fiber and liquids; elimination of medications with constipating side effects whenever possible).

Various investigations have been recommended in the diagnosis of anisumus. Physical examination can rule out anismus (by identifying another cause) but is not sufficient to diagnose anismus.The measurement of pressures within the rectum and anus with a manometer (pressure-sensing probe). defecating proctogram, and MRI defecography

Other techniques include manometry, balloon expulsion test, evacuation proctography (see defecating proctogram), and MRI defecography.[29] Diagnostic criteria are: fulfillment of criteria for functional constipation, manometric and/or EMG and/or radiological evidence (2 out of 3), evidence of adequate expulsion force, and evidence of incomplete evacuation.[29] Recent dynamic imaging studies have shown that in persons diagnosed with anismus the anorectal angle during attempted defecation is abnormal, and this is due to abnormal (paradoxical) movement of the puborectalis muscle.[30][31][32]

Initial steps to alleviate anismus include dietary adjustments and simple adjustments when attempting to defecate. Supplementation with a bulking agent such as psyllium3500 mg per day will make stool more bulky, which decreases the effort required to evacuate.[5] Similarly, exercise and adequate hydration may help to optimise stool form. The anorectal angle has been shown to flatten out when in a squatting position, and is thus recommended for patients with functional outlet obstruction like anismus.[14] If the patient is unable to assume a squatting postures due to mobility issues, a low stool can be used to raise the feet when sitting, which effectively achieves a similar position.

Treatments for anismus include biofeedback retraining, botox injections, and surgical resection. Anismus sometimes occurs together with other conditions that limit (see contraindication) the choice of treatments. Thus, thorough evaluation is recommended prior to treatment.[33]

Biofeedback training for treatment of anismus is highly effective and considered the gold standard therapy by many.[26][34][35] Others however, reported that biofeedback had a limited therapeutic effect.[36]

Historically, the standard treatment was surgical resection of the puborectalis muscle, which sometimes resulted in fecal incontinence. Recently, partial resection (partial division) has been reported to be effective in some cases.[36][40]