Its causes are numerous. Generally it occurs because of damage to the kidney tissue caused by decreased kidney blood flow (kidney ischemia) from any cause (e.g., low blood pressure), exposure to substances harmful to the kidney, an inflammatory process in the kidney, or an obstruction of the urinary tract that impedes the flow of urine. AKI is diagnosed on the basis of characteristic laboratory findings, such as elevated blood urea nitrogen and creatinine, or inability of the kidneys to produce sufficient amounts of urine.

AKI may lead to a number of complications, including metabolic acidosis, high potassium levels, uremia, changes in body fluid balance, and effects on other organ systems, including death. People who have experienced AKI may have an increased risk of chronic kidney disease in the future. Management includes treatment of the underlying cause and supportive care, such as renal replacement therapy.

The clinical picture is often dominated by the underlying cause.The symptoms of acute kidney injury result from the various disturbances of kidney function that are associated with the disease. Accumulation of urea and other nitrogen-containing substances in the bloodstream lead to a number of symptoms, such as fatigue, loss of appetite, headache, nausea and vomiting.[4] Marked increases in the potassium level can lead to abnormal heart rhythms, which can be severe and life-threatening.[5]Fluid balance is frequently affected, though blood pressure can be high, low or normal.[6]

Pain in the flanks may be encountered in some conditions (such as clotting of the kidneys’ blood vessels or inflammation of the kidney); this is the result of stretching of the fibrous tissue capsule surrounding the kidney.[7] If the kidney injury is the result of dehydration, there may be thirst as well as evidence of fluid depletion on physical examination.[7] Physical examination may also provide other clues as to the underlying cause of the kidney problem, such as a rash in interstitial nephritis (or vasculitis) and a palpable bladder in obstructive nephropathy.[7]

Acute kidney injury is diagnosed on the basis of clinical history and laboratory data. A diagnosis is made when there is a rapid reduction in kidney function, as measured by serum creatinine, or based on a rapid reduction in urine output, termed oliguria (less than 400 mLs of urine per 24 hours).

AKI can be caused by systemic disease (such as a manifestation of an autoimmune disease, e.g. lupus nephritis), crush injury, contrast agents, some antibiotics, and more. AKI often occurs due to multiple processes. The most common cause is dehydration and sepsis combined with nephrotoxic drugs, especially following surgery or contrast agents.

The causes of acute kidney injury are commonly categorized into prerenal, intrinsic, and postrenal.

Prerenal causes of AKI (“pre-renal azotemia”) are those that decrease effective blood flow to the kidney and cause a decrease in the glomerular filtration rate (GFR). Both kidneys need to be affected as one kidney is still more than adequate for normal kidney function. Notable causes of prerenal AKI include low blood volume (e.g., dehydration), low blood pressure, heart failure (leading to cardiorenal syndrome), liver cirrhosis and local changes to the blood vessels supplying the kidney. The latter include renal artery stenosis, or the narrowing of the renal artery which supplies the kidney with blood, and renal vein thrombosis, which is the formation of a blood clot in the renal vein that drains blood from the kidney

Intrinsic AKI refers to disease processes which directly damage the kidney itself. Intrinsic AKI can be due to one or more of the kidney’s structures including the glomeruli, kidney tubules, or the interstitium. Common causes of each are glomerulonephritis, acute tubular necrosis (ATN), and acute interstitial nephritis (AIN), respectively. Other causes of intrinsic AKI are rhabdomyolysis and tumor lysis syndrome.[10] Certain medication classes such as calcineurin inhibitors (e.g., tacrolimus) can also directly damage the tubular cells of the kidney and result in a form of intrinsic AKI.

Postrenal AKI refers to acute kidney injury caused by disease states downstream of the kidney and most often occurs as a consequence of urinary tract obstruction. This may be related to benign prostatic hyperplasia, kidney stones, obstructed urinary catheter, bladder stones, or cancer of the bladder, ureters, or prostate.

Introduced by the KDIGO in 2012,[11] specific criteria exist for the diagnosis of AKI.

AKI can be diagnosed if any one of the following is present:

The RIFLE criteria, proposed by the Acute Dialysis Quality Initiative (ADQI) group, aid in assessment of the severity of a person’s acute kidney injury. The acronym RIFLE is used to define the spectrum of progressive kidney injury seen in AKI:[12][13] 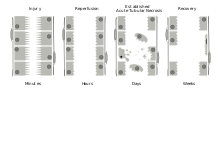 Pathophysiology of acute kidney injury in the proximal renal tubule

The deterioration of kidney function may be signaled by a measurable decrease in urine output. Often, it is diagnosed on the basis of blood tests for substances normally eliminated by the kidney: urea and creatinine. Additionally, the ratio of BUN to creatinine is used to evaluate kidney injury. Both tests have their disadvantages. For instance, it takes about 24 hours for the creatinine level to rise, even if both kidneys have ceased to function. A number of alternative markers has been proposed (such as NGAL, KIM-1, IL18 and cystatin C), but none of them is currently established enough to replace creatinine as a marker of kidney function.[14]

Once the diagnosis of AKI is made, further testing is often required to determine the underlying cause. It is useful to perform a bladder scan or a post void residual to rule out urinary retention. In post void residual, a catheter is inserted into the urinary tract immediately after urinating to measure fluid still in the bladder. 50–100 ml suggests neurogenic bladder dysfunction.

These may include urine sediment analysis, renal ultrasound and/or kidney biopsy. Indications for kidney biopsy in the setting of AKI include the following:[15]

In medical imaging, the acute changes in the kidney are often examined with renal ultrasonography as the first-line modality, where CT scan and magnetic resonance imaging (MRI) are used for the follow-up examinations and when US fails to demonstrate abnormalities. In evaluation of the acute changes in the kidney, the echogenicity of the renal structures, the delineation of the kidney, the renal vascularity, kidney size and focal abnormalities are observed.[16] CT is preferred in renal traumas, but US is used for follow-up, especially in the patients suspected for the formation of urinomas. A CT scan of the abdomen will also demonstrate bladder distension or hydronephrosis. However, in AKI, the use of IV contrast is contraindicated as the contrast agent used is nephrotoxic.

The management of AKI hinges on identification and treatment of the underlying cause. The main objectives of initial management are to prevent cardiovascular collapse and death and to call for specialist advice from a nephrologist. In addition to treatment of the underlying disorder, management of AKI routinely includes the avoidance of substances that are toxic to the kidneys, called nephrotoxins. These include NSAIDs such as ibuprofen or naproxen, iodinated contrasts such as those used for CT scans, many antibiotics such as gentamicin, and a range of other substances.[17]

Monitoring of kidney function, by serial serum creatinine measurements and monitoring of urine output, is routinely performed. In the hospital, insertion of a urinary catheter helps monitor urine output and relieves possible bladder outlet obstruction, such as with an enlarged prostate.

In prerenal AKI without fluid overload, administration of intravenous fluids is typically the first step to improving kidney function. Volume status may be monitored with the use of a central venous catheter to avoid over- or under-replacement of fluid.

If low blood pressure persists despite providing a person with adequate amounts of intravenous fluid, medications that increase blood pressure (vasopressors) such as norepinephrine and in certain circumstances medications that improve the heart’s ability to pump (known as inotropes) such as dobutamine may be given to improve blood flow to the kidney. While a useful vasopressor, there is no evidence to suggest that dopamine is of any specific benefit and may be harmful.[18]

The myriad causes of intrinsic AKI require specific therapies. For example, intrinsic AKI due to vasculitis or glomerulonephritis may respond to steroid medication, cyclophosphamide, and (in some cases) plasma exchange. Toxin-induced prerenal AKI often responds to discontinuation of the offending agent, such as ACE inhibitors, ARB antagonists, aminoglycosides, penicillins, NSAIDs, or paracetamol.[7]

The use of diuretics such as furosemide, is widespread and sometimes convenient in improving fluid overload. It is not associated with higher mortality (risk of death),[19]nor with any reduced mortality or length of intensive care unit or hospital stay.[20]

If the cause is obstruction of the urinary tract, relief of the obstruction (with a nephrostomy or urinary catheter) may be necessary.

Lack of improvement with fluid resuscitation, therapy-resistant hyperkalemia, metabolic acidosis, or fluid overload may necessitate artificial support in the form of dialysisor hemofiltration.[5

Depending on the cause, a proportion of patients (5–10%) will never regain full kidney function, thus entering end-stage kidney failure and requiring lifelong dialysis or a kidney transplant. Patients with AKI are more likely to die prematurely after being discharged from hospital, even if their kidney function has recovered.[2]

The risk of developing chronic kidney disease is increased (8.8-fold).[26

There is an increased incidence of AKI in agricultural workers, particularly those paid by the piece. No other traditional risk factors, including age, BMI, diabetes, or hypertension, were associated with incident AKI. Agricultural workers are at increased risk for AKI because of occupational hazards such as dehydration and heat illness.[28]

Acute kidney injury is common among hospitalized patients. It affects some 3–7% of patients admitted to the hospital and approximately 25–30% of patients in the intensive care unit.[29]

Acute kidney injury was one of the most expensive conditions seen in U.S. hospitals in 2011, with an aggregated cost of nearly $4.7 billion for approximately 498,000 hospital stays.[30] This was a 346% increase in hospitalizations from 1997, when there were 98,000 acute kidney injury stays.[31] According to a review article of 2015, there has been an increase in cases of acute kidney injury in the last 20 years which cannot be explained solely by changes to the manner of reporting.[32]

Before the advancement of modern medicine, acute kidney injury was referred to as uremic poisoning while uremia was contamination of the blood with urine. Starting around 1847, uremia came to be used for reduced urine output, a condition now called oliguria, which was thought to be caused by the urine’s mixing with the blood instead of being voided through the urethra.[citation needed]

Acute kidney injury due to acute tubular necrosis (ATN) was recognized in the 1940s in the United Kingdom, where crush injury victims during the London Blitz developed patchy necrosis of kidney tubules, leading to a sudden decrease in kidney function.[33] During the Korean and Vietnam wars, the incidence of AKI decreased due to better acute management and administration of intravenous fluids.[34]